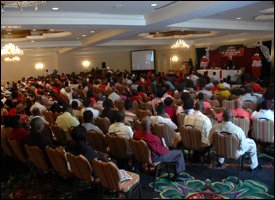 Over 700 delegates as well as dignitaries from the diplomatic and consular corps and non-governmental organisations are expected to attend the official opening ceremony at the St. Kitts Marriott Resort Ball Room.

Following the remarks by the Featured Speaker, the presentation of the new Miss Labour 2009/2010, her runners-up and other contestants and the honouring of the mothers from the 8 constituencies on St. Kitts, Prime Minister Hon. Dr. Denzil L. Douglas, will address the Conference in his capacity as the Political Leader of the St. Kitts-Nevis Labour Party.

The public session will be followed by the Private Session attended only by delegates during which the Conference will receive the Report of the National Executive and the Financial Report from the Treasurer.

Resolutions from the National Executive, the 8 branches, Young Labour and Labour Women, the auditors will be elected.

The Conference will also elect officers and the new National Executive before the adjournment.

Sunday’s Conference is expected to be the last before the next General Elections constitutionally due by October this year.