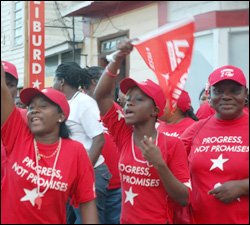 Crowds of people are celebrating around St. Kitts and Nevis early Tuesday as it was confirmed that the incumbent St. Kitts-Nevis Labour Party had won Monday’s general election.

The SKNLP was returned to power in Monday’s general election with a slightly reduced majority in an election Prime Minister Hon. Dr. Denzil L. Douglas described as one “of the most crucial” in the history of the twin island Federation.

Preliminary figures released by the Electoral Office show that that the SKNLP, had won six seats on St. Kitts as compared to the seven seats it won in the 2004 general election.

Prime Minister, who won a fourth consecutive term in office, comfortably won his seat in Constituency Six, defeating his challenger, Junie Hodge by a margin of 1,905 votes to 179.

According to the Caribbean Media Corporation (CMC), one of the opposition People’s Action Movement (PAM) increased its seats in the Parliament from one to two, after Eugene Hamilton won the St. Christopher 8 constituency from the incumbent Cedric Roy Liburd, the Minister of Housing, Agriculture, Fisheries, and Consumer Affairs, who was seeking a fourth consecutive victory.

The other victory for the PAM came through deputy leader, Shawn Richards, who polled 1,128 votes in defeating Dr. Norgen Wilson of the SKNLP, who received 985 votes.

Both the SKNLP and PAM contested the eight seats that were up for grabs in the election on St. Kitts.

On the island of Nevis, where three seats were at stake, the Concerned Citizen’s Movement (CCM) maintained its identical record of 2004, when it won two seats to the one received by the Nevis Reformation Party (NRP).

Former Nevis Premier Vance Amory and Mark A.G Brantley were the victorious CCM candidates, while Patrice Nisbett was the lone victor for the NRP.

Addressing thousands of jubilant supporters in the capital on Tuesday morning, Prime Minister Douglas said he was thankful to the population for putting its trust in his administration.

“I want to thank you, I will continue to serve you,” he said over loud cheers and whistles from the supporters who waited for more than 12 hours after the polling stations were closed to be informed of the victory.

“It (the election) is probably the most crucial election we might have in this country and you have done the right thing,” he said, adding “thanks again to the people of this country.”

The campaign for the elections had been one of the most intense in recent history and Dr. Douglas told the rally that “so far it has been excellent nobody has gone to war.”

He urged the population to “respect the choice of the people and let the country settle down” adding “let us begin today the healing process.”

Dr. Douglas said he was particularly proud of the role played by the young people in the campaign of his party, noting “you gave us the energy”.

Tuesday has been declared a public holiday.

At least 32,766 persons were eligible to cast ballots in the election, which was monitored by teams from the Organisation of American States (OAS), the Caribbean Community (CARICOM) and the Commonwealth.