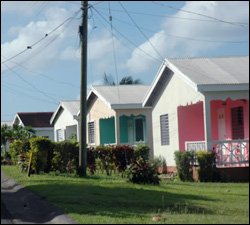 The governing St. Kitts-Nevis Labour Party has recommitted itself to make the creation of home ownership a priority in the new five-year term.

The Labour Party, which is seeking a renewal of its mandate with the people of St. Kitts and Nevis next Monday January 25th, has built over 4,000 homes over the past 14 years.

The latest statistics indicate that the Labour Party Administration of Prime Minister Hon. Dr. Denzil L. Douglas built and facilitated the construction of 4,053 homes between July 1995 and December 2009. This is compared to the 251 homes built by the former Peoples Action Movement (PAM) of The Right Hon. Dr. Sir Kennedy Simmonds.

The Labour Party built homes through the National Housing Corporation (NHC) programmes in 44 new locations and 16 existing locations, a total of 60 locations compared to 16 locations by the former PAM Administration.

The quality of the homes built and provided to nationals and their families is also important in the provision of a comfortable residence.

The Labour Party in its 2010 Manifesto said it understands the far-reaching benefits of home ownership and the dramatic difference that owning a home can make in a person’s life.

The Labour Party reiterated that it knows that when someone acquires a home for the firsttime, “control an asset whose value increases from year to year; are freed from the un-ending obligation to pay rent can not look forward to the day when rent nor mortgage payments will be necessary and will have these newly freed funds for investments or other purposes.”

The Labour Government’s mechanisms for expanded home ownership include the Special Land Initiative, the National Housing Corporation and the Development Bank of St. Kitts and Nevis.

The incumbent Labour Government said it is offering tax relief to commercial banks that ease credit terms to first-time minimum wage purchasers, but an EC$10 million standby facility is being established at the Development Bank in case this offer is not accepted.