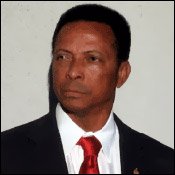 Dr. Rawlins, who is President and Founder of The VonFrederick Group, a Sacramento, California, based counter-terrorism and criminological organization is also the founder of The Crime, Violence and Terrorism Blog.

The half-hour opening ceremony will feature the invocation by Father Isaiah Phillip and remarks by St. Kitts and Nevis Prime Minister and Minister of National Security, Hon. Dr. Denzil L. Douglas and the Premier of Nevis, Hon. Joseph Parry.

According to the website of the VonFrederick Group, Rawlins has working experience in Iraq, Afghanistan, Europe, Africa, Asia, Central and South America, the Middle East and the Far East, in the capacity of a counter-terrorist and a criminologist. He has appeared on numerous television interviews and talk-radio, discussing homeland security and terrorism issues, as well as criminal profiling and criminal behavior.

Prior to founding the VonFrederick Group, he has been an adjunct professor of Criminal Justice and Criminology, Sociology, Ethnic Studies, Physics, Chemistry, and History. Rawlins has also lectured at Gakushuin University, in Tokyo, Japan. Rawlins served as a United States Marine. He was a Marine Corps Drill Instructor (DI) at Parris Island, South Carolina, an NCO Academy Instructor in Japan and an Officer Candidates School Instructor at Quantico, Virginia.

Dr. Rawlins also worked as the Executive Director of a (non-profit organization) facility that houses teenage female gang-bangers involved in drugs, prostitution and extremely violent crimes.  He was the administrator of another facility for extremely violent adolescent boys with strong gang affiliations.