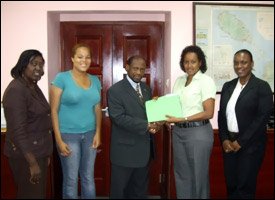 Key areas of the Report were identified during a lively two-hour meeting with Prime Minister Douglas and Permanent Secretary in the Ministry of National Security, Mrs. Astona Browne.

The presentation of the report coincides with the convening of a National Consultation on Crime by Prime Minister Douglas at the St. Kitts Marriott Resort and Royal Beach Casino on Friday.

SKNYPA intends to disseminate the report later this month.

The St. Kitts National Youth Parliament Association is a non-profit, non-governmental youth organisation launched in 2001 with a mandate to be an enabling agent for the open and honest discussion of national issues and a driving force for positive youth involvement in political and legislative processes in St. Kitts and Nevis.