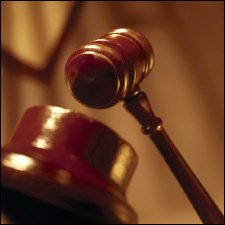 Judge Drops The Gavel On Decision

The Eastern Caribbean Court of Appeal has granted the Government of St. Kitts and Nevis leave to appeal the Contempt ruling against the Federation’s Attorney General, Dr. the Hon. Dennis Merchant.

“Indeed what was for us most satisfying, was that, that decision was made after considering submissions made both on behalf of the appellants, which are us and the respondents, which are Mr. Lindsay Grant and Mr. Shawn Richards,” said Mr. Astaphan.

“So it’s a good first step. It means that we have passed a threshold required for a successful prosecution of an Appeal and we are hoping to have everything filed by Friday at the very latest so we can expedite the hearing of the appeal on the question of the injunction,” said Astaphan in a telephone interview.

Senior Counsel also disclosed that the Court of Appeal has asked the Appellants (Government) to consent that the Contempt of Court Appeal be heard on the 8th of October in St. Vincent.

“We have readily agreed to that suggestion, because it’s a recognition that this Appeal on the question of Contempt is very urgent, and we are now waiting on the other side to consent,” said Astaphan.

He said he hopes that the lawyers for Richard and Grant “will not prevaricate and withhold consent to delay the hearing of the appeal in relation to the Contempt findings against the Attorney General.”

Mr. Astaphan noted that the Justice Errol Thomas is still to give his judgment in the substantive matter.

“We are awaiting his judgment most patiently. We are hoping obviously for all of the best. But so far we are happy with the Grant of Leave to Appeal the refusal to grant the injunctions. We are also very happy that the Court of Appeal wants to expedite the hearing of the Contempt matter,” said Astaphan.

“We are putting the challenge out to the lawyers for Mr. Richards and  and and Mr. Grant, if you think your Appeal is so, so absolutely strong, let us agree to have this matter heard in St. Vincent on the 8th of October to get an expeditious hearing from the Court,” said Astaphan.

He called for an end to “playing politics” in this Constitutional matter and “get these matters heard so we can go and have the General Election and let the people decide.”

The Attorney General has asked the Court of Appeal to set aside the Judgment and Orders of the Justice including the Order of costs of the Learned Judge on several grounds.

Also that by his legal advice, that the without notice order did not preclude the laying of the report before the National Assembly, the Appellant as Attorney General, facilitated the Government in violating the orders and as a result was in contempt of court.

The Appellant also contends that the learned Judge erred in law and misdirected herself when she failed to consider and/or hold that the without notice injunctions and orders against the Appellant as Attorney General, was in constitutional proceedings (which are not civil proceedings for the purposes of the Crown Proceedings Act) meaningless as (i) the Attorney General had absolutely no statutory duty to perform in respect of these proceedings, (ii) the orders made no mention of the proceedings of the National Assembly or section 50 (3) of the Constitution and no Minister or Member of the Assembly were parties to the proceedings, and (iii) the Boundaries Commission had already submitted its report to the Governor General.