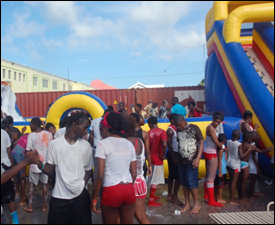 J’Ouvert 2010 was different this year than any other year. This year, they headed to the J’Ouvert Beach Chill, behind the National Museum on Port Zante.

Thousands of revellers had a place to cool off after raising their body temperature following several hours of dancing through the streets of Basseterre or just watching from the sidewalks in the hot sun.

“They were able to enjoy and dance to the local music, sample the local cuisine and catch up with family and friends from home and overseas. In the past, the celebrations were terminated at 11am or by mid-day and revelers and onlookers were forced to return to their homes, or else find their own source of entertainment with which to fill the remainder of their day,” said Dr. Garfield Alexander.

He pointed out that after the day breaks and the heat of the mid-morning climbs, there is a need to cool down the body temperature while still allowing the party to continue. 2010’s J’Ouvert festivities this year continued on the “beach!”

It’s like a natural beach with a twist to this scenery and that is a beach without sand. This particular beach will be completed with foam and the location was designed so that both J’Ouvert troupe participants and bystanders had an afternoon filled with continued entertainment.

There were areas for relaxation mixed and blended seamlessly with play areas for kids. Vendors supplied food and drinks and there were performances on a stage by local artists and models.