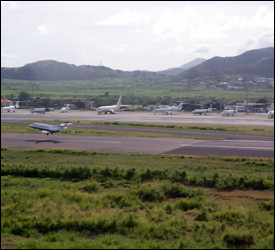 He said most of the jets, which range from the Learjet 25 to the Executive 737, will be parked until early January 2011.

Their owners are either on St. Kitts, on Nevis or neighbouring St. Maarten. “Fifteen jets are parked on the tarmac as we speak. One of the jets is parked here while the owner took a helicopter to nearby St. Barth’s,” Wilkins told the Communications Unit in the Office of the Prime Minister (CUOPM) on Wednesday.

He said the increase in ececutive jets are not hampering the operation of the scheduled arrivals and departures by American Airlines, Delta Airlines, US Airways, British Airways and LIAT.

SCASPA’s aim to provide a top-class service to passengers on executive jets when a world class Private Air Terminal Facility (FBO) at the Robert L. Bradshaw International Airport is completed.

Construction of the first phase of the $20 million project by Veling Limited in the southeast corner of the airport is to start during the first half of next year and will be completed in two phases over the next 10 years.

The architectural design of the FBO will reflect that of the Caribbean culture, while the interior will offer ultra-modern facilities and first-class services.

During the recent signing of the agreement between SCASPA and Veling, Prime Minister Douglas said the facility has become an important need, as there has been sustained and substantial increase in the use of the airport by Executives and celebrities using private aircraft services.