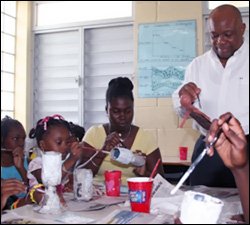 The Nevis Island Administration (NIA) did not want the locomotive of history to roar through the 21st century and left the young people of Nevis to stand forlorn and ill equipped to meet the demands of the economy.

That was the reason given recently by Deputy Premier of Nevis and Minister of Social Development Hon. Hensley Daniel, why the Administration had embarked on a far-reaching programme of social reorganisation on the island.

“We are doing it because we want the church, the school and the families to become less thermometers and more thermostats to transform the morals and values of our society,” he said.

The Minister said a programme of that nature did not need money to succeed but in his experience believed that volunteerism was key.

“I have a sense that what we need is for all of us”¦if we gave one hour per week to voluntteer with some small group of people somewhere in some community, that is inexpensive work that could have a tremendous impact on the people of the community”.

“We can begin to work with the young people. When they see the people from the private sector showing interest in them, the people from civil society or whatever, this tells them that they are valued. This helps to save the Ministry of Finance some money,” he said.

Mr. Daniel contended that prevention programmes had no sounds but only had effects unlike the noisy ambulances with sirens which historically had been invested in.

“Let us redirect our resources from rehabilitation to prevention and  let us engage all of those people who have benefitted from scholarships and student loans”¦They must find a way now to help other people become like them and they must get in the trenches and do something to help the other people. Become role models and help.

“I am asking us to end that deafening silence and this standing at attention while so many things are happening. When there is a shooting in the community the first thing you hear is “What the government is going to do? What about the community? Wasn’t the community involved in raising these criminals? Did the community stand by and let them be criminals?” he questioned.

He said when one spent an hour with the young people they were ultimately investing in the future security of themselves and the community.