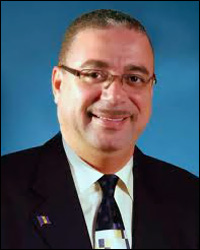 Prime Minister Thompson was no stranger to St. Kitts, having spent some quiet weekends with family and friends on the island.

Born on Christmas Day 1961, the same year that the Rt. Excellent Sir Errol Walton Barrow, many years later his mentor, became the Premier of Barbados, it was as if David Thompson was destined for great things and high office.

The third child of Barbadians, Margaret and Charles Thompson, his early childhood spanned London in Britain, where he was born, and Barbados where he was nurtured and schooled.

He received his primary teaching at the St. Gabriel’s Junior School before proceeding to Combermere School for his secondary education. It was while at Combermere that he displayed and developed his considerable intellectual abilities. It was also there that he excelled in debate and public speaking.

Indeed, he came to prominence and public attention as the leading panelist for his alma mater, in the then popular secondary schools’ television debates ““ Understanding.

That forum and his active membership of the youth arm of the Democratic Labour Party (DLP) of Mr. Barrow, virtually catapulted him into the national limelight and he was seen as a future leader bequeathed to Barbados by Mr. Barrow.

David Thompson completed his secondary schooling at Combermere, securing a Barbados Exhibition in 1979. He returned and taught at his alma mater for a year before entering the Law Faculty of the University of the West Indies where he read for a degree, graduating with honours in 1984.

He then pursued the Legal Education Certificate at the Hugh Wooding Law School of the University of the West Indies in Trinidad. That prepared him for his chosen and natural profession. He further honed his legal and oratorical skills at the feet of Errol Barrow Q. C. whose law firm, Trident Chambers, he joined in 1986. There, he rubbed shoulders with some of the other legal luminaries of the day: Asquith Phillips Q.C., George Moe Q.C., Carol Fields Q.C. and Philip Greaves Q. C.

Between 1986 and 1988, he served as a part-time tutor in law at the University of the West Indies. Following Mr. Barrow’s untimely death in 1987, he successfully contested the by-election in the constituency of St. John which he has represented ever since.

Mr. Thompson’s first Cabinet appointment was in 1991 when he was made Minister of Community Development and Culture. His passion for and commitment to meaningful youth development, as well as his interest in culture, saw him in the vanguard in the establishment of the Barbados Youth Service and the Youth in Business Programme, as well as in the restructuring of the National Youth Orchestra.

From 1992 to 1993, he was switched to the Ministry of Finance as Minister of State, and between 1993 and 1994 he assumed full responsibility for that Ministry. During that time, he was responsible for restructuring the sugar industry and the offshore sector, monitoring the government’s successful stabilization programme with the International Monetary Fund and the structural adjustment programme that was implemented in 1993.

Often described as the consummate politician by his peers, David Thompson has also experienced the vicissitudes of electoral politics over 20 years. Always handsomely winning his own riding, and by overwhelming margins in all six attempts, he was, however, the leader of the Democratic Labour Party when it lost the general elections of 1994 and 1999.

Never one to be daunted by transient setbacks, he relinquished both positions of Leader of the Opposition (which he held from 1994) and the leadership of the DLP in 2003; but came back in 2006 as Opposition Leader and DLP President.

During the interregnum, he turned to his law practice, specializing in corporate, insurance, international business and property law. Prior to this, he had also established a law partnership that lasted from 1994 to 2000.

In short time, following his re-appointment as Leader of the Opposition in 2006, he set about putting his stamp on the DLP. The party regrouped, as he reinvigorated its rank and file and went on a relentless two-year campaign to restore the DLP as the political party of choice for the majority of Barbadians. His efforts turned around the fortunes of the DLP and saw it regaining the reigns of power in January 2008 when it won 20 of the 30 parliamentary seats.

Little wonder that at age 46, Prime Minister David Thompson, Mr. Barrow’s protÃ©gÃ©, is the sixth holder of the office since Independence. He also has ministerial responsibility for the portfolios of Finance, Economic Affairs and Development, Labour, the Civil Service and Energy.

His bold and much acclaimed Families First programme, in his beloved St. John, is a pioneering initiative that aims to re-establish and re-assert the family unit as the paramount and core constituent in the overall development of communities.

An avid reader, with a near insatiable appetite for literature on people, politics and international affairs, he lists cricket, football, music and community activities as his hobbies, whenever time permits.