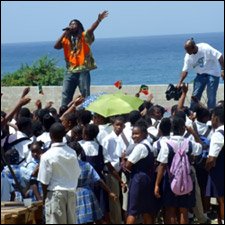 Hundreds of students in St. Kitts declared “Badness Outta Style” on Wednesday as the appropriately named school tour concluded with visits to the Sandy Point and Basseterre High Schools.

Deputy Prime Minister Honourable Sam Condor told SKNIS that young people are heavily influenced by reggae, pop, dancehall and other genres of music, and the Government was keen to continue tapping into the positives that are promoted by the respected artistes on the TEMPO organized tour.

“This is a very expensive exercise but we think it is important,” Minister Condor revealed. “We will do anything, whatever the cost, to ensure that our children understand that they must conduct themselves in a way that will see the country improve and progress and develop in a manner that is befitting a young, developing nation.”

Minister Condor, who holds the portfolio for education and youth, explained that he was encouraged by the response of the students to the words of the artistes as well as the messages shared by the guest speakers including Police Inspector Lyndon David and reformed prison inmates Java Lawrence and James Allen.

Mr. Allen, 45, told the hundreds of spectators that he was serving a lengthy prison term and was discouraged by the number of youth being incarcerated for crimes.

“You can’t even find five people over 45-years-old in prison anymore. All of the new inmates are under 30 and 25. It is not good,” he stated, imploring the youth population to reject the alien gang culture.

The Badness Outta Style school tour was organized in collaboration with the Ministry of National Security to promote positive behaviours. Minister Condor stressed that the White Paper on Education Development and Policy 2009-2019, to be implemented in September, will have a defined purpose in this regard as well.

The White Paper addresses the government’s general agenda for education reform and development in the Federation. Strategies and priorities for the development of education at the early childhood, primary, secondary, post-secondary, and tertiary levels and provisions for Special Needs Education are key among other provisions.

“Some of the initiatives that will be used to address the violence in school and [other] antisocial behaviours will be after school programmes,” said the Deputy Prime Minister, noting that this will serve to keep young people engaged in productive activities.

Additionally, the Ministry of Education is advocating that each secondary school establish a cadet corps for first form (7th grade) students.

“We are hoping that the discipline that this organisation instills in young people will help to build and mould character and make them responsible “¦ citizens,” the Deputy Prime Minister Honourable Sam Condor concluded.