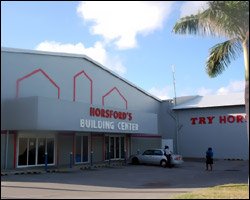 He disclosed that after tax profits increased by EC$2.7 million or 44.4 percent to EC$9 million.  Of this, the parent company and wholly-owned subsidiaries contributed EC$6.3 million and associated companies contributed EC$2.7million.

“In spite of the then gathering clouds in the external economies, the economy in St.Kitts and Nevis performed well during the period under review,” said Mr. Kelsick, who pointed out that all of the company’s operations contributed positively to the profitability with gains at the Building Center, Automotive Department, Furniture and Appliances Department, Value Mart IGA and Texaco Gas station located at Wellington Road.

“There were, however, declines in performance at our Nevis Center, Avis Car Rentals and Ocean Cold Storage,” said Mr. Kelsick.

“Increases in operating expenses were kept in within acceptable levels. Increases in employment costs, advertising, delivery and building maintenance costs were offset by savings in depreciation and bad debt expenses. Income tax expense had an effective rate of 36.6 percent versus 38.7 percent in 2007,” said the Report.

Mr. Kelsick said that the improvement in performance enabled the Directors of the 134-year-old company to recommend an increased dividend of 0.08 per share for a total of EC$2.4 million, allowing retention of EC$6.6 million.

“The gathering clouds in the external economies referred to earlier have resulted in an economic storm not experienced by most of us in our lifetimes. While St.Kitts and Nevis has been spared of most of its effects to date, the extent of its future impact on us remains uncertain. What we can be certain of is that we will be affected adversely,” said Mr. Kelsick, who noted that the Company intends to take measures and adopt policies to ensure that the Company emerges from this period with minimal, if any, damage.

“Foremost among these would be continuous focus ensuring that we become and remain the “Company of Choice” to consumers in St. Kitts and Nevis as well as efforts to continuously improve efficiencies,” said Mr. Kelsick, who expressed thanks to the staff for their “support and dedication” and consumers in both St. Kitts and Nevis for their “continued loyalty and support.”