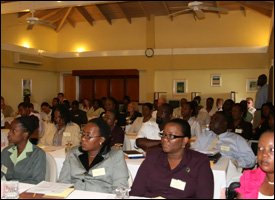 Legal Advisor in the Nevis Island Administration (NIA) Hon. Patrice Nisbett said Monday, that though the fight against money laundering and terrorist financing was arduous and protracted, continued harmonised efforts by all involved in the battle was key.

His comment came at the fifth one day Anti-money Laundering Awareness Seminar which was held at the Mount Nevis Hotel. The theme for this year’s event was “Meeting International Compliance Standards ““ Our Caribbean Experience”. It formed part of a week of activities to mark the 25th anniversary of the Nevis Financial Services.

He said Nevis had established itself as a reputable international financial centre and was determined to develop and expand its role as one of the premier centres in the Caribbean.

However, Mr. Nisbett acknowledged that although no financial centre was safe from the threat of misuse by money launders and terrorists of its industry, the failure to recognise and prevent money laundering and terrorist financing was laden with risks, which came in diverse forms and affected the jurisdiction and industry alike.

“There are reputable, operational and financial risks following administrative and regulatory sanctions, ever increasing policy changes, lost income streams and client base as a result of negative exposure. As an international financial centre, we have an undeniable interest in combating money laundering and terrorist financing,” he said.

The Legal Advisor pointed to the Financial Action Task Force (FATF), which he said had identified emerging risks through charities or non-governmental organisations, wire transfers and real estate and insurance transactions and had aggressively promoted awareness, enhanced standards and monitored progress through associated bodies like the Caribbean Financial Action Task Force (CFATF).

He said though St. Kitts and Nevis was a small jurisdiction, it had played an important role in the fight against those scourges which was evident by its appointment as Chair to the CFATF for 2009 and it hosted the organisation’s 28th Annual plenary and Ministerial Meeting in November 2008.

Nonetheless Mr. Nisbett said the jurisdiction should not be complacent, since money launders and contributors to terrorist were persistent in probing financial systems for loopholes and were creative in their development of new techniques to overpower safeguards.

He further said the government had recognised that working with the private sector to preserve a strong Anti Money Laundering/Combating Financing Terrorism (AML/CFT) regime as they made it more difficult for criminals to exploit the economy.

He urged the participants to conduct proper due diligence checks on their clients; know their customers and their business since customer identification was the first line of defence against money laundering.

The Legal Advisor also advised them to report all suspicious transactions to the Financial Investigative Unit; to keep proper records of all their clients’ transactions and to train staff.

“Appoint a Compliance Officer who will be the liaison between your institution and the regulator in matters relating to compliance with AML Regulations and other laws with respect to money laundering. Also ensure that your staff, front line staff and those dealing with new customers are trained in your institution’s AML/CFT policies and procedures.

“Get to know key pieces of legislation including their amendments governing AML/CFT matters. Familiarise yourselves with the Proceeds of Crime Act, Financial Intelligence Unit Act and last but not least the Anti-money Laundering Regulations and Guideline notes,” he said.