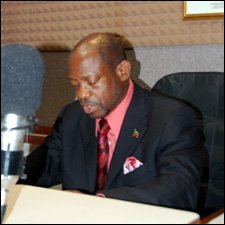 Legislation providing for persons seeking election to the St. Kitts and Nevis National Assembly to declare that he or she is qualified to be a member is not unique.

St. Kitts and Nevis Prime Minister Hon. Dr. Denzil L. Douglas said The National Assembly Elections (Amendment) (No. 2) Act, 2009 passed in the St. Kitts and Nevis National Assembly last week is similar to legislation that exists in the Cooperative Republic of Guyana and the Republic of Trinidad and Tobago to safeguard the interests of their constitutions.

“From previous case laws it is very clear that if you are not qualified at nomination, then you are not qualified for election and we have said that with what has happened in Jamaica and other Caribbean nations, it is important that we do not waste our resources and so we thought that it was important that the person who is being nominated to first make sure that he or she declares that he or she would have met all of the requirements by law that allows him to be qualified to be elected,” said Dr. Douglas.

He said the Returning Officer will on Nomination Day “simply assist the candidate in affirming, in swearing that he or she is in fact qualified to be elected to the National Assembly,” said Prime Minister Douglas in response to a caller on his weekly “Ask the Prime Minister” radio call in programme on Tuesday.