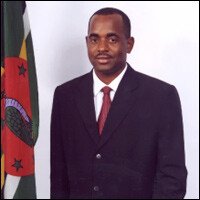 Addressing the 79th Annual Conference of the ruling St. Kitts-Nevis Labour Party (SKNLP) on Sunday, Mr. Skerrit, also the Political Leader of the governing Dominica Labour Party said that gasoline prices were also on the increase and contributing to the economic problems of the Caribbean region.

“Here in the Caribbean, we are all feeling the pinch of the global energy crisis, and we are forever proposing and debating new ideas for minimizing its impact.

“The ongoing global economic downturn has impacted the availability of investment capital, resulting in shrinkage of new jobs and employment opportunities,” said Mr. Skerrit, pointing out that the story in St. Kitts and Nevis is no different to that in Antigua and Barbuda, Dominica, Barbados, Trinidad and Tobago, Europe, the United States, Latin America or even some economies in Asia, which at first appeared impregnable.

He said balancing budgets and staying afloat in these difficult economic times is a full time job in itself and that elected leaders “have their work cut out for them.

“None of our islands is in the position to print money and to spend its way out of the recession that is impacting our economies,” Skerrit said, adding that “the easiest thing is for a party in opposition to say, in general terms, what they would do if they were in office.”

“The reality, however, is that they would be confronted with the same hard and harsh realities which we have to deal with on a daily basis. We have continuously to be searching for credible strategies to avoid having to take the harsh medicine recommended by our economic advisors in government and by multilateral agencies such as the International Monetary Fund, the World Bank, Standards and Poor’s and even, closer to home, the Caribbean Development Bank and the Eastern Caribbean Central Bank.”

Prime Minister Skerrit said that the game of musical chairs in respect of changing personalities in government is not the answer to the region’s problems.

“I believe our populations have for the most part understood and accepted this and that is why, here in St. Kitts and Nevis for example, they have consistently turned to your illustrious political party, the St. Kitts-Nevis Labour Party, for leadership in navigating the turbulent economic waters.”

The Dominica Prime Minister acknowledged that the job of being a head of government in the Caribbean “is as difficult and perhaps even more difficult and demanding than it was 15 years ago,” noting that on a daily basis “new and unexpected issues arise in the international and economic landscape for which creative and innovative solutions have to be found to keep the ship of state afloat.

“It is safe to say, that no one in active professional life today, has had to grapple with an economic decline the nature of that which we have been afflicted with over the past four years.

“Thus, as a political party in office, and especially one with several years of practical political experience at the helm, my humble message to you today is that you have to give your leaders the space to operate, so they can concentrate on the near-daunting task of keeping these economies in the Caribbean afloat.

“This reality poses a challenge on what I would refer to as the second line of leadership of your political party to step up its act, and play a more prominent and proactive role, at the level of the village and the constituency, in the political issues of the day.”

He urged all members of the SKNLP to rise to the occasion and ensure that party groups are formed and functioning in all constituencies.