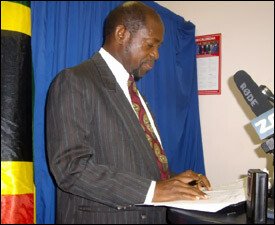 St. Kitts and Nevis Prime Minister Hon. Dr. Denzil L. Douglas said continued strong leadership and experienced will be required to help the twin-island Federation face the global financial crisis and is confident his Labour Party will win the next general election constitutionally due by October next year.

Responding to a question during his monthly press conference on Wednesday afternoon, Prime Minister Douglas noted that the region and the world are facing tremendous challenges, including the global financial crises, some of which have already unfolded and others still on the horizon.

“Not for my Party, but for the sake and the benefit of the people of St. Kitts and Nevis. This country is going to need experienced (and) strong leadership to take us through this period. I believe that my Party has demonstrated its ability to bring this leadership to the country, especially considering the serious transformation that is taking place in the country, as we move our economy away from its dependence on sugar-agriculture over the centuries, to what we see as the bright and exciting prospects of tourism and hospitality, information and technology and financial services,” said Dr. Douglas.

“The people will vote for change, because we believe in change. That’s what my Party has been doing for the last 13 years. We have been able to manage change that was necessary in this country. We are a Party of change and it is in that context that the people voted for my Party. We are the managers of change over the last 13 years,” said Prime Minister Douglas, who made it clear that the people of the twin-island Federation have not forgotten what the People’s Action Movement (PAM) stood for in the past.

“PAM must change itself from within. Its basic policies have not changed. The stark victimisation that took place during PAM’s 15 years in office. Almost seven out of ten families in this country can point their finger to PAM and say “˜when you were in power for 15 years, you victimised my family. My mother had to leave the simple drain cleaning to find bread for her children who were hungry’,” said Prime Minister Douglas.

He spoke of the mother who told him that she was one of the cooks working at the prison who were dismissed by the PAM Administration simply because she did not support the PAM candidate in the general election.

“One child in particular was just about the age to start high school and she could not even send the boy to high school because she was deprived of bread. Imagine a cook in a prison. Seven out of ten families can point a finger at PAM and say “˜you victimised me.’ Our people have not forgotten.”