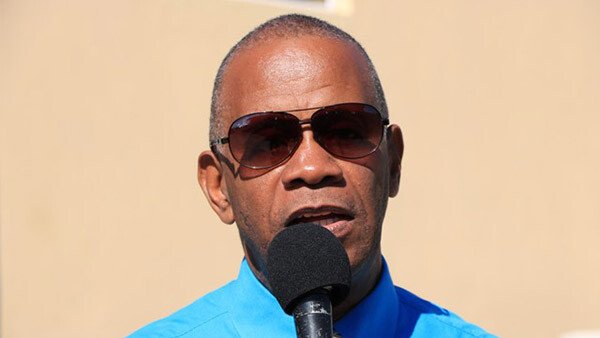 Hon. Eric Evelyn, Minister of Social Development and Culture on Nevis says the multi-purpose cultural facility under construction by the Nevis Island Administration (NIA) at Market Shop in Gingerland would complement the other existing government-owned venues on the island.

The minister made the comment while visiting the active construction site for a first-hand look at the progress there on October 30, 2019.

“I want to make it clear that the facility that we are constructing in Gingerland is in no way intended to compete with any of the cultural facilities on the island. It’s a means of complementing.

Mr. Evelyn stated that the facility will also be used to host some Culturama events.

“The other good thing about it, is that I would have said last year or earlier this year that we are trying our utmost to de-centralise some of the activities for Culturama, and that will be an ideal opportunity for one or a couple of the activities to be hosted right here in Gingerland.

“We’ve had a lot of interest from churches, from schools to host activities here because people see the opportunity and we have provided that golden cultural opportunity for all of the persons on the island of Nevis,” he said.

The minister noted that the NIA had taken a decision to construct the facility to safeguard the island’s culture.

“This is an administration that is forward looking. This is an administration that is doing things not just for one-off activities. We are doing things to ensure that the culture of Gingerland, the culture of Nevis lives on, and this will be a multi-purpose facility not only for the Gingerama festival but several of the performing arts and cultural arts would be taught here, he said.

Mr. Evelyn noted that interest continues to mount from the public in hosting activities there.

“I’ve been getting a lot of interest from persons who are saying ‘We want to host this activity there,’ because trust me, once this facility is finished persons on the island will be very pleased with its quality, and will be running here to host activities and we will be very happy to facilitate all of you who would want to use the facility.

“As I would have said before, the facility is for the use of all of us on the island of Nevis. This is your tax payers’ money and it will be available to all of you at a cost of course,” he said.

Chairman of the Gingerama Committee Eric Evelyn, said recently that the Gingerama Festival, which has been named after the locality of Gingerland in the St. Georges Parish, will return after 14 years.

This announcement was made at a press conference at the Nevis Cooperative Credit Union Conference Hall. Evelyn stated that the reintroduction of the community-based Festival was supported by the Department of Community Development. It is slated to commence on December 17-20, 2015, under the theme “Reviving our culture preserving our heritage.”

Evelyn stated that among the many benefits to be derived from the reintroduction are the exhibition of talents by the area’s residents and the stimulation of the overall economic activities of the St. Georges’ area on Nevis.