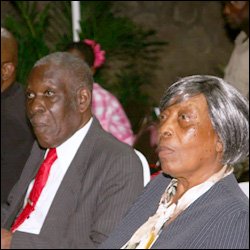 Premier of Nevis, the Hon. Joseph Parry commended Mr. Phinehas Griffin for being an outstanding family man and political stalwart.  Mr. Parry commendation came recently at a ceremony held by the Gingerland Library to honor Mr. Griffin, as part of its annual Black History Month celebrations in February.

“I am so pleased that more and more Nevisians are celebrating Black History Month. I am also happy to see that it has become a main stream thing and persons who have paved the way like Mr. Uhral Swanston who was honored by the Library last year and Mr. Griffin are being honored,” he said.

During the ceremony, the Premier reminded the audience of the Nevis of yesteryear.

“A number of persons here can remember Nevis with the poor roads, bad water system, lack of electricity, very little jobs, no Sixth Form on the island of Nevis, but these men made tremendous sacrifices for us to have these things today,” he said.

The Premier noted that it was important for the society to recognize those who came before and led the way. He said that he respected people from St. Kitts who have never failed to inform every generation, that Robert L. Bradshaw was a man who was an outstanding statesman.

Mr. Parry explained that Nevisians had always valued land, family, hard work and education. He went on to say that these values were being lost because parents have failed to inform the next generation of the values and the importance of those who led the way because of politics.

“Mr. Griffin did not seek fame, the limelight or to be on television, he just wanted to make a contribution to his country and help make Nevis a better place for all of us,” remarked Premier Parry.

“Born in Butlers Village, Nevis on June 15th 1932, he Phinehas Griffin, arrived at 8:00 A.M to Alice Hanley and Elihu Griffin during the era of the Great Depression, which was a time of abject poverty. Thankfully, the era of the depression passed but he has never gained worldly wealth,” she said.

Mrs. Kelly also spoke of his years at the St. James Government School better known as “Whitehall” where he began his formal education.

“Play was his strongest subject, which he passed with honors but never got a certificate in the subject.  He was never strong in the other subjects and everyone thought he was crazy but he left school early before he could be certified.  However, his public reason for leaving school was the need of work in order to support himself, his grandmother and mother.”

In 1955, he married Florence also of Butlers and this union brought 3 children, Kay, Curtis and Benilda.

In the 1960’s Mr. Griffin and his family moved to England. One day he received a call from his Pastor who suggested he tune in to a television programme. He saw a march and the people in Nevis were demonstrating and it was at that point Mr. Griffin’s interest in politics was whipped up.

On his return to Nevis in 1974 he became involved in local politics with no intention or desire to do any more than support local action.

He returned to construction and worked with Warner Construction. Around 1976 he obtained a job as a foreman at the Public Works Department with responsibilities for the Charlestown Pier, the Power Plant at Prospect, Camps Bridge, the Netball Courts in Charlestown and the renovation of the Gingerland Secondary School.

However, when he was asked to become more involved in politics he reluctantly agreed and became the representative for the people of St. James Parish from 1987 ““ 1992.

He held the Portfolio of Jr. Minister of Communication and Works, Jr. Minister in Agriculture and Minister of Education and Health in the Premier’s Ministry.  According to Mrs. Kelly he did his best to help the people in his community.

Mr. Griffin’s daughter Benilda in relation to her dad’s philosophy on work said, “Whatever you do, do it as unto God. If you are going to pick up the garbage, be the best garbage picker upper you can be.”