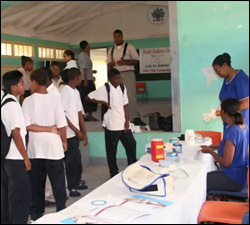 While World Diabetes Day was celebrated on Nov. 14, the free screening was held last Friday [Nov. 12] in the school’s auditorium in an effort to maximize student participation.

Health Coordinator on Nevis, Mrs. Shirley Wilkes and her team of healthcare workers were on site to assess students’ blood pressure and blood sugar levels as well as their various body weights.

Mrs. Wilkes said that while there was a general tendency to associate diabetes with the elderly, “it is not just an old person’s disease.”

“As a matter of fact,” according to Mrs. Wilkes, “the programme [to combat diabetes] was “based on healthy eating and active living to prevent diabetes in 13 to 15 year olds.”

“The activity today is like a summing up of the whole three-year programme by commemorating World Diabetes Day,” she added.

While the previous themes had been selected to reflect different conditions of diabetes, last year’s theme “Know all you can about diabetes” remained unchanged. This, as explained by Mrs. Wilkes, was a decision made after realizing “that a number of people do not even know that they have diabetes.”

“They,” she said, “do not even know what the symptoms are for diabetes so for the next five years, the theme is know all you can about diabetes.”

The school’s principal, Mrs. Dawn Jeffers, in addition to recording her support of the coordinator’s initiative, challenged parents to help Mrs. Wilkes with her health promotion efforts. This, she believed would “help build a stronger, healthier nation.”