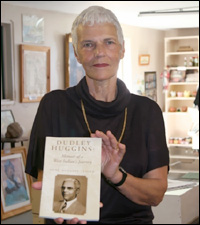 The Nevis Historical and Conservation Society [NHCS], welcomed with open arms, a book written by Dr. Anne Huggins-Lever in memory of her father, the late Mr. Dudley Huggins.

Titled “Dudley Huggins: Memoir of a West Indian’s Journey,” the book was formally presented to the NHCS at a brief ceremony in Charlestown where members of the society, including Board Directors Ms. Andrea Kay and Dr. Daphne Hobson, President Mr. Hanzel Manners and Executive Director Mrs. Evelyn Henville, witnessed the event.

Although now residing in the United Kingdom [UK], Dr. Huggins-Lever said she was proud of her father’s work throughout the Caribbean. She added that his years of service coupled with the personal desire to ensure that her grandchildren were aware of her Nevisian parentage, contributed to her writing the book.

“It would be very important that if they [her grandchildren] didn’t want to listen now, then someday they could read about it because I think my [father] and grandfather were remarkable men,” she said.

Dr. Huggins-Lever, according to NHCS’ Executive Director, made several visits to Nevis and spent time at the NHCS archives where she researched her family’s history.

Following the death of Dr. Huggins-Lever’s Nevisian grandfather; the late Mr. Hastings Huggins who had amassed vast acreages of sugar and cotton lands, her father worked in agriculture to earn a living. He eventually worked as a professor at the University of the West Indies [UWI] and later as Pro-Vice Chancellor at UWI’s St. Augustine Campus.

Like her father, Dr. Huggins-Lever achieved much success as a professional, particularly in the field of medicine.