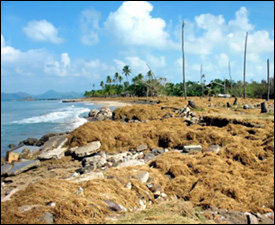 Premier of Nevis, the Hon Joseph Parry, is reporting that Nevis continues to receive favourable reviews among potential investors as was evident at the recently held St. Kitts – Nevis Investor Seminar in ZÃ¼rich, Switzerland.

Premier Parry, who was the special guest speaker at the seminar held on June 15 singled out for mention, great strides that have been made by the Four Seasons Estates, and pointed out that a ground breaking ceremony for new property development will take place on Nevis in July.

“At least one person came to me and told me they were going to buy a property from Four Seasons Estates, and that decision was obviously made because of the seminar, and a number of other persons showed a keen interest in buying,” Premier Parry told the Department of Information on Thursday June 21, upon his return from ZÃ¼rich.

Premier Parry, who is also the Minister of Tourism, observed that before he left for the seminar he was aware of two persons who concluded deals and several other persons who have shown interest in the Four Seasons Estates property development.

“In fact in July , there will be a ground breaking ceremony by Four Seasons Estates for property development and they should be employing over a hundred persons,” noted the Premier. “That is a very good thing for Nevis especially as the construction industry has been weak at the moment.”

Premier Parry was accompanied by his Financial Secretary, Mr. Laurie Lawrence and his Personal Assistant, Ms. Juliet O’Loughlin at the seminar which was hosted by Henley & Partners and the Consulate-General of St. Kitts-Nevis in ZÃ¼rich. It highlighted investment opportunities available in the Federation.

“They were promoting the Citizen by Investment Programme, among a number of clients in Switzerland and I was invited to address the gathering to explain basically what St. Kitts and Nevis have to offer in terms of tourism development,” said the Hon. Parry. “I focused more on St. Kitts and Nevis, the attributes from a tourism position, and what makes St. Kitts and Nevis what it is as a country.”

Other persons at the seminar included Mr Terence Crossman, the CEO of the Sugar Industry Diversification Fund (SIDF), Mrs Cherryleann Pemberton who deals directly with the processing of the Citizenship by Investment Programme, Mr. Terry Scanlan of the Four Seasons Estates, Mr. Chris Kaline of Henley & Partners who is one of the leading persons in the Citizen by Investment Programme, and representatives from the Kittitian Hill Village.

According to Premier Parry, the seminar was attended by investors, lawyers, real estate persons and other persons who have an interest in St. Kitts and Nevis.

“It was a very positive seminar,” noted Premier Parry. “I also met with Mr Stephen Jones there and he has business here in Nevis, and we have been discussing hotel development and I think we have begun to move very fast forward at the moment.

“There are certain areas I was able to help them into pointing in the right direction for financial assistance in order to complete his financial package, which should be concluded in early July.”