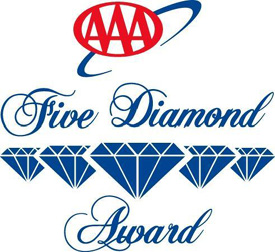 Premier and Minister of Tourism, the Hon. Joseph Parry says he is elated that the Four Seasons Resort Nevis has received the prestigious AAA Five Diamonds Award in AAA’s (American Automobile Association) 2013 hotels and resorts rankings.

The award to the island’s flagship hotel, comes on the heels of a 2012 Certificate of Excellence Award by Trip Advisor, after visitors to the Resort constantly commended the resort with top reviews resulting in a 4.5 Trip Advisor overall rating.

“I am truly pleased that after my assistance with the many challenges to get Four Seasons Nevis up and running again, the up-scale property has been able to reach significant heights due to the hard-working staff and management,” the Premier said.

When the Resort re-opened in 2010, the property added a number of enhancements including the only Sail Laser Training School in the Caribbean to its Water Sports Center, new dÃ©cor for all of its 196 guest rooms and suites, a refurbished Fitness Center with technical-gym equipment, and extensive landscaping to the outdoor spaces.

According to General Manager Mr. Andrew Humphries, the Resort is sporting a new look and a roster of novel activities after a two-year, US $110 million renovation.

Humphries said, “we are thrilled to be back on the map and better than ever. With this recognition from AAA, we join an elite group of hotels worldwide that are recognized for excellence at every level.”

Back in 1992, shortly after its opening on February 14, 1991, the Four Seasons Resort Nevis was the first AAA Five Diamond property to be named in the Caribbean region.

In 1995, the Resort went on to be named the #1 Hotel in the World by the readers of Conde Nast Traveler magazine, and was spotlighted as one of the premier properties in the Caribbean by travel agents, visitors and travel writers worldwide.

Activities at the Resort have been recognized internationally.

The Four Seasons Resorts Golf and Spa facilities were recently ranked among the top in the Caribbean region in the 2012 Conde Nast Traveller Golf and Spa polls, respectively.

In the UK, the editors of Gallivanter’s Guide highlighted the Resort as their #2 Best Pick in the Caribbean.

In Canada, the Globe and Mail named Nevis as one of the Top Five Must-See International destinations in 2012.

The Resort can also boast of culinary programs that partnerships with local fishermen and organic farmers showcasing the fresh sea food and ingredients stemming from the island’s fertile volcanic soils and shores.