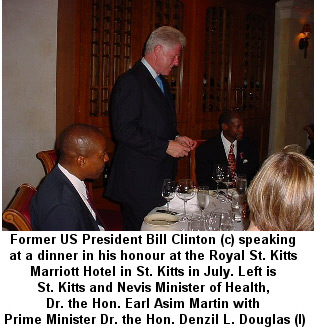 Former United States President, the Hon. Bill Clinton, has joined regional and world leaders in congratulating St. Kitts and Nevis as it celebrates its 25th Anniversary of Independence.

“As a vibrant democracy with a thriving economy and deep commitment to justice and human rights, St. Kitts and Nevis has much to celebrate and is a natural friend of the United States,” said Clinton in a congratulatory message.

He noted that during his Presidency, he was pleased to “strengthen our relationship through such efforts as signing into law the Trade and Development Act of 2000, which helped to further bilateral trade with the Caribbean basin and promote its long-term growth and democracy.”

Mr. Clinton said that as a former President, he remains “dedicated to working with the people of St. Kitts and Nevis.”

“In 2002 when I was in Barcelona at the World AIDS Conference, I spoke with Prime Minister Douglas about the need to set up health systems and get antiretroviral drugs to the Caribbean to help stem the rising tide of AIDS and ensure its people had access to treatment. I agreed to help, although I had no idea how I would do so,” said Clinton.

He said today, his non-profit foundation’s HIV/AIDS Initiative implements large scale integrated care, treatment and preventive programs in several countries in the Caribbean and makes HIV/AIDS drugs and diagnostics more affordable for 1.4 million people including those in St. Kitts and Nevis. “This has been and remains one of my top priorities,” said Mr. Clinton.