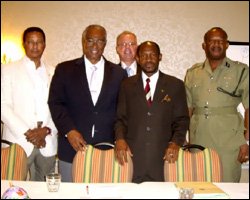 He has announced that a 30-year veteran of the FBI has joined the Ministry of National Security.

“He has extensive experience in the area of criminal investigations.  He brings with him a wealth of law enforcement management experience.  He knows gang culture intimately, has fought it successfully, and brought criminal gangs to justice in the United States,” said Prime Minister Douglas, who is also Minister of National Security.

Mershon, who has worked on the East Coast and West Coast, has over 30 years of FBI experience.

“Most importantly, he is now a part of our team,” said Prime Minister Douglas, who told listeners to his “Ask the Prime Minister” programme that the Ministry of National Security will be making a series of announcements pertaining to the joint efforts and programmes.

Mr. Mershon was among participants to a National Consultation on Crime in December and during an earlier visit met and held discussions with government officials, the Chamber of Industry and Commerce, the Nevis Island Administration and non-governmental organisations including youth groups, educators and guidance counselors the St. Kitts and Nevis Bar Association and members of the judiciary including the Resident Judge and Senor Magistrate.