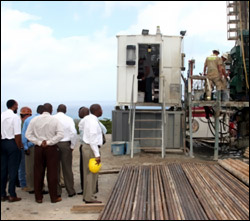 The geothermal exploration project on Nevis received another boost on Thursday April 17, 2008, when Minister of State in the Ministry of Finance, Sustainable Development, Infrastructure and Technology in the Federal Government of St. Kitts and Nevis Hon. Nigel Carty, gave a commitment that St. Kitts stood ready to purchase renewable energy from Nevis.

The Junior Federal Minister made the disclosure in an interview with the Department of information during his visit to Nevis where he met and held discussions with Junior Minister with responsibility for Works, Public Utilities, Natural Resources and the Environment in the Nevis Island Administration (NIA) Hon. Carlisle Powell along with members of the Nevis Electricity Company Ltd. and West Indies Power Nevis Ltd. the company involved in ongoing geothermal explorations on the island.

The visiting Minister who was accompanied by Director of Physical Planning and the Environment in the Federal Government Mr. Randolph Edmeade, OAS Director to St. Kitts and Nevis Mr. Starett Green and Consultant to the government of St. Kitts and Nevis through an OAS arrangement Dr. Albert Binger, said that he was impressed with the discussions held and operations at the Spring Hill Nevis I drill site.

“I am very much impressed by what I am seeing here and having had the technical explanations and the kinds of attributes we want to discover being discovered here on the site we are feeling very enlightened, very heartened in St. Kitts and Nevis that this is going to come to be of some great value to the people of the Federation,” he said.

Minister Powell who was accompanied by Manager of the Nevis Electricity Company Ltd (NEVLEC) Mr. Cartwright Farrell, technical staff Mr. Jervan Swanston and Mrs. Anelda Date explained that based on his advice by the technical people involved with the geothermal explorations project that they had arrived at a stage in which power could be produced.

“I have been advised by the technical people involved that we are at the stage where we can actually produce power here on the drill site and what they are looking for would be further efficiency so that you are looking for greater temperatures and with that they would be able to provide a plan that would be able to operate cheaper and produce more,” he said.

West Indies Power’s Chief executive Officer Mr. Kerry McDonald who conducted the tour of the drill site confirmed that the drill team had arrived at a temperature of over 205 degrees Celsius which was greater than 400 degrees Fahrenheit.

“At that time we will be able to gather all the information to decide what kind of plant we will put in but we still are planning to be able to start construction this year so that we will be able to deliver power to Nevis and St. Kitts certainly by the end of 2008 or the first part of 2009,” he said.

Mr. McDonald explained that the existing drill site [Nevis I] had the capacity to produce 200 megawatts when drilling was completed after which the drill team would move to a second site [Nevis II] located in Upper Jessups or Belmont area.

He said the site had already been constructed and when the drill rig was completed at the Spring Hill location by month end it would be commence drilling at the second site which was estimated to produce like amount of power as the Nevis I site.

“So between here and there which is approximately two miles we should be able to produce somewhere between the 200-300 megawatts in this zone,” he said.

Future plans include exploration work at Mount Travers and then to Bush Hill.

Meantime, OAS Director Mr. Green said the organisation was pleased that it has been able to provide technical and legal input into a project of such importance while he expressed his delight to be on the actual exploration site.

Dr. Binger too added his sentiments about the project and the technical information the team had received.

“That sounds good I don’t need to change anything about that. The only thing I would say the sooner the better and cheaper even better,” he said.