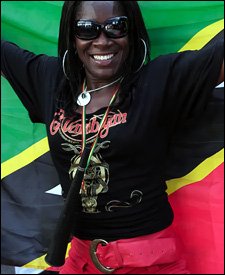 Fun Will Be Had By All At The St. Kitts – Nevis Carnival

Thirty-eight years since the debut of National Carnival in St. Kitts and Nevis, its organizers are committed to continue building both its brand and buzz.  So they have turned to the popular social networking sites Facebook and Twitter to help accomplish these goals.

The St. Kitts and Nevis National Carnival Committee created Facebook and Twitter pages on the night of Saturday, October 31 to coincide with its Carnival Programme release party, which took place in Independence Square.

On Twitter, the Carnival page can be found at http://twitter.com/SKNCarnival.

The Carnival page on Facebook is titled “˜St. Kitts and Nevis National Carnival 2009/2010′.

What’s remarkable is that this has been achieved without the aid of traditional media publicity.  Rather, the National Carnival Committee relied on “Facebook Friends” and, in general, on the social networking power of the World Wide Web to spread the word.

“Let the record show that we’re at 159 Fans approximately 24 hours after starting this Facebook page,” declared a posting by the Carnival page administrator on Sunday night.

The posting to the Fans continued: “This shows the power of participation”¦All of this is thanks to YOU!”

As a gesture of gratitude, the National Carnival Committee plans to distribute prizes regularly to lucky users of its social networking pages.

Around midday, Tuneero Connor became the 500th Fan of the Carnival page on Facebook.  As the 500th Fan, he will receive a ticket to a Carnival Committee-organized show of his choice.

The Fans are excited by the prizes to be won as well as by the interactive nature of the Carnival page on Facebook.  They have been posting photos and memories of Carnival on a daily basis.  Fans also navigate the Facebook page to read Carnival press releases and event listings.

Nationals of St. Kitts and Nevis who live abroad make up a sizeable share of the fan base.

Islyn Warner, a member of St. Kitts and Nevis Association of Florida, Inc., in a Facebook post on Monday night extended “A special thanks to the Carnival Committee for sharing this site with us who are living abroad.”

Warner added that she would tell all of her contacts about the Carnival page on Facebook.

The online presence of St. Kitts and Nevis National Carnival 2009/2010 will be extended further with the launch of its official website this coming Monday, November 9.