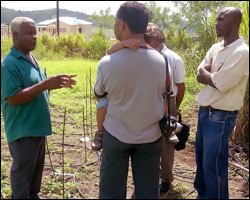 The Peoples Action Movement shadow Minister of Agriculture, Eugene Hamilton is of the firm view that expanding the local agriculture market for produce will aid significantly in maintaining farmers survival.

Hamilton noted that expanding the market was the ultimate objective of a PAM administration. Hamilton pointed out that his party intends to create and establish various avenues and platforms so as to ensure that adequate supportive services are created for farmers to tap into the export market.

He noted that when elected his party will seek various forums in an effort to persuade potential buyers to “come in and work with farmers within the federation so as to aid the situation.”  The PAM shadow minister spoke about the urgent need for an aggressive export drive will significantly be the ultimate solution for farmers’ economic survival.

Hamilton recollected when his party was once in office noting that the agriculture sector was booming and stood firmly due to the investments and opportunities that were created.

He pointed out that hadn’t the PAM administration created certain infrastructural projects, agriculture would have been non existent today. He however noted the importance of adding the necessary services for stakeholders to tap into the market.

He however stopped short of identifying a number of initiatives that his party has in place that they intend to implement when they take office. “I will not reveal everything as it is important that I keep something’s under cover for the appropriate time,” he said.

He stressed that with a Peoples Action Movement administration farers will not suffer noting that his party understands clearly the important role of agriculture and intends to adequately invest the required resources thus ensuring that there is food security within the federation.