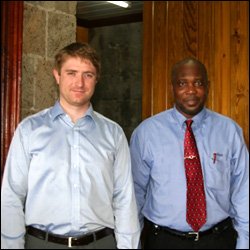 A geothermal expert from the National Energy Authority of Iceland said there were a number of environmental considerations associated with any geothermal exploration but how the developer managed them would determine the extent to which it would affect the environment.

Mechanical Engineer and Geophysicist Geothermal Specialist Mr. Jonas Ketilsson who ended his one week visit to Nevis on Friday, told the Department of Information that he had held discussions with the developers West Indies Power (WIP) who outlined a number of steps they had planned to undertake to safeguard the island’s environment.

He said they planned to inject the runoff water from the power plant back into the resource so as to protect the island’s costal marine life.

Mr. Ketilsson said too that there was also the issue of gas emissions from the power plant and pointed to sulphur dioxide, one of the natural by products of volcanic activity. The Developer he explained planned to utilise abatement technology.

“What you do then is that you separate the gasses from each other and you use scraping technology to get the gasses to precipitate into a solid form. Then if that is done you don’t have a problem at all with that…according to the current data it does not look like it is going to be a problem,” he said.

Among the other issues he spoke of was the visual effect in relation to the planned cooling towers on the power plant.

“In the evening when the sun is setting you might see steam flowing from the cooling towers but this really depends on your temperature and whether or not this will humidify. It will be visible but it is not harmful to anyone, it is just water,” he said.

In response, Junior Minister with responsibility for Communications, Works, Public Utilities, Post, Physical Planning, Natural Resources and Environment on Nevis Hon. Carlisle Powell said the Nevis Island Administration (NIA) had taken every effort to ensure that the environment was not harmed in anyway by the developmental work of the island’s geothermal resource.

Meantime, Permanent Secretary in the Ministry of Ministry of Communications, Works, Public Utilities, Post, Physical Planning, Natural Resources and Environment, Mr. Ernie Stapleton who has been working closely with the project gave the assurance that an Environmental Impact Assessment study must be conducted by the developer.

“They [WIP] have done a study already which I have shared also with National Energy Authority but there are some other studies that have to be done. It is not an if or maybe, they have to do and Environmental Impact Assessment. That would take several months because there are consultants who would have to come and do the analysis. I give West Indies Power the credit because they also have that as part of their activity in terms of the development,” he said.

Mr. Stapleton who had visited Iceland in 2008 in a delegation led by Premier of Nevis Hon. Joseph Parry and which included Minister Powell also explained that there would be some level of noise associated with the drilling operations as the project progressed and told the public that they should not be alarmed.

He said the three slim holes that had already been drilled at Spring Hill, Upper Jessups and Hamilton, were not the holes from which electricity would be generated but instead from production wells which will be drilled later on in the project.

“The production well may produce some noise when it is blowing so that is something that people have to be careful of. This noise is not going to be something that will be forever. When the plant is set up and they have done the assessment and it is covered it will be like any other power plant. As a matter of fact I believe the noise emission is much less than at Prospect [Power Plant],” he said.

Mr. Stapleton noted that the drilling equipment for the production well was a bigger rig which would produce noise.

“When it is drilling the production well [it will make] noise and again that is not something that is permanent that is just something during the process. So I just want the people of Nevis to realise that they should not be alarmed when you see these things the blowing of the well is necessary [for testing and assessing the resource].

“Noise is part of the whole process of drilling so these are concerns for a small community like Nevis you will experience but that is not anything to be alarmed about,” he assured.