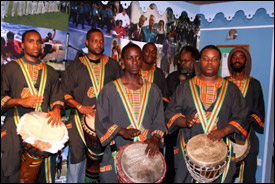 I Afrikana Drummers Perform In Nevis

The Department of Culture has recently made an effort to keep the culture of St. Kitts and Nevis alive by hosting music and drumming lessons during the 2012 Renee and Ian Naismith Summer Residential Camp at the Beach Allen Primary School.

The Department of Culture collaborated with the Ministry of Youth Empowerment to have these lessons during the July 19 – 29 camp.

Music facilitator, Nigel Williams, expressed that children were very interested in learning about music and he saw potential in all of them.

“I taught 20 campers not only how to play the recorder and how to recognise notes but also music history,” said Mr. Williams. “It is important for them to know how music came to be and how it evolved over time. It doesn”™t matter what kind of instrument they were playing; learning about the history of music sets the foundation for them to be versatile when selecting or listening to an instrument. I could tell that they were very interested in learning all these aspects. These children have a gift and we must nurture it. That is why I taught them pieces to play at this year”™s Independence Gala.”

Facilitator for the drumming lessons, Royd Phipps, stated that drumming has been ever present in our Federation”™s culture and is an art that must be kept alive. He shared with the St. Kitts and Nevis Information Service (SKNIS) what he taught 18 campers during his sessions.

“I not only taught them different drum routines but I instilled in them the history behind drums,” Mr. Phipps said. “I think by instilling in them the history behind drumming they would appreciate the art much more. I believe a passion for drumming came out of them when they played for some cultural dancers at the camp show. I also showed them how it can become a business venture for them.”

Camp coordinator, Geoffrey Hanley, stated that every year, since 1983, the Residential Camp has been creating a safe and fun summer camp to underprivileged children. He added that the two-week camp was highly successful because of the number of children who attended.

“When I asked them about the various activities of the camp, I received nothing but positive feedback,” noted Mr. Hanley. “I could see the excitement in there eyes and their eagerness to learn about music and drumming.”

This year 248 children attended the camp and preparations are already being made for the 30th Anniversary of the annual camp.