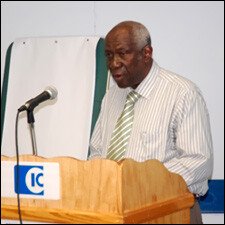 Founder of the Montserrat Times and the Leewards Times, Mr. Howell Bramble, also told the local media workers there are journalists who are seen as “political activists” and have let it be known that they are open to accepting money for angling certain stories.

Mr. Bramble said that the visit of President of the Association of Caribbean Media Workers, Mr. Wesley Gibbings and veteran journalist, Lennox Grant, which coincided with the launching of “The Election handbook for Caribbean Journalists,” was an opportunity to participate in an exercise which can sharpen their reportorial and editorial skills since it coincided with the heated preparations for general elections.”

He said if the facilitators choose to emphasise the dangers of bias, the importance of accuracy, and adumbrate on the wisdom of balance and integrity which can make journalism an honourable and respected profession, their time will be well spent.”

“We journalists claim to report the facts, to tell the whole truth-not a half of it, we claim not to indulge in selective disclosure. But in the large and small countries of the region, it is no secret that journalists have their own sides in the political arena. It has been even been put about that there are journalists who have let it be known that they are open to accepting money for angling certain stories. If there’s a shred of truth in that, I hope that the exercise on which are about to embark will put an end to such considerations of reward,” said Bramble, a 42-year veteran in the field of journalism.

“Supporters of all sides may be equally guilty. But we cannot allow our noble craft to be painted with the same brush as that reserved for the world’s oldest profession,” said Bramble.

He said that politics is an area in which journalists should be encouraged to specialise, but there are pitfalls which should be avoided.

“One of our regional colleagues interacted with some of us in the not too distant past and later referred to some of us as “political activists.” It is for each of us to consider, in light of the professionalism we claim, whether we are in that category,” said Mr. Bramble, who attended the Thomson Foundation Editorial Studies Center and Britain’s London School of Journalism and worked as a sports and news journalist at Radio Antilles in Montserrat.