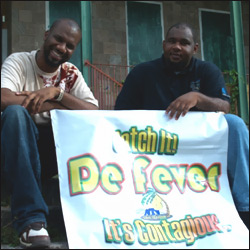 Director of the Department of Information in the Nevis Island Administration (NIA) Mr. Huey Sargeant described De Fever, a new interactive entertainment initiative on Nevis Television (NTV) as successful. The programme which was designed to attract the island’s younger population was launched on June 10, 2008.

In an interview along with NTV’s producer Mr. Cory “Masablue” Tyson, Mr. Sargeant explained that the half hour Tuesday night programme with a repeat on Friday, was part of the Department’s strategy to involve younger persons and to enhance the programming which had not included an interactive programme.

“So far so good and we are pleased especially based on the response. So far we have had three different shows and it’s like we have tweaked it and we continue to tweak it.

“In terms of enhancing NTV’s programming, the target really is to attract younger viewers. We have had complaints over the years that we had a set of programming that was general and attracted the older population, adults, and academics but then with this [De fever] you we are moving away from the “Ëœtalking heads’. Basically you [audience] are tired of seeing persons just sitting in front of the camera and read a script of just talk at the audience. This show is far more interactive than anything that we have had previously,” he said.

Mr. Sargeant said he had observed that De Fever had taken on a life of its own since it first aired three weeks ago and was hopeful that the programme would become the most definitive entertainment and socially sought after programme on the island.

“De Fever from what I have observed in three weeks is pretty much taking on a life of its own. I want De Fever to be really very successful and be pretty much the number one source for entertainment and social life on Nevis.

“You tune into De Fever to find out what’s going on and what’s happened. It has a life of its own where it goes, we are guided by the public of course and what they want, once it is within the parameters of good broadcasting we are willing,” he said.

Notwithstanding, the Director said plans for another interactive programme called Tips for Tax had already commenced.

“It’s just basically the new thrust of making NTV more interactive. We are also looking at doing live programming in the very, very near future complete with call in programmes.

“With us being a government entity there are certain limitations as to what we can do but we have an advantage that we are the only television station on the island so we do have responsibilities on lets just say both sides of the divide so we are trying,’ he said.

Mr. Tyson who conceived De Fever gave an insight into the programme and its future.

“The show involves the public way more. We do the street interviews, we go out and we film in public places, we feature independent and privately owned businesses and sort of showcase what Nevis has to offer not only talent and entertainment but what we have as far as restaurants and hotels and that sort of thing.

“It was launched and conceptualized as an outlet for the Nevis Cultural Development Foundation to get their information out in an entertaining way instead of doing their typical Culturama talk show, so we wanted to package and present the information in a better way and so far so good,” he said.

Mr. Tyson said he saw De Fever acting as a sibling to the Nevis News Cast. Whereas the NNC would continue to bring general news, De Fever would concentrate on brining the entertainment news the social going happenings and anything entertainment on the island.

He also said that discussions were advanced to have the programme available on the Internet through a social networking website called Nevislinkup and the possibility existed for dissemination in St. Kitts as well.