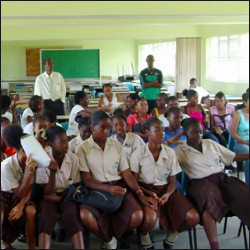 High school students around St. Kitts faced off on Friday in a test of their knowledge about HIV/AIDS.

The Washington Archibald High School served as the venue for the preliminary round of the “Let’s See What You Know ““ HIV/AIDS Game Show” which is being implemented by the CARICOM Youth Ambassadors of St. Kitts and Nevis in collaboration with the Ministries of Education, Youth and Health.

The first match-up featured the Basseterre High versus the Washington Archibald High, while the Cayon and Sandy Point High Schools squared off in the second grouping. The two-member teams chose from a total of 30 questions from six categories including stigma and discrimination, basic facts, testing and treatment, statistics, acronyms and HIV and nutrition.

At the end of the contest, Washington Archibald and Cayon were the schools with the most points. The schools will meet at the July 4 finals which will be broadcast live on ZIZ television. There is no admission fee to the competition which begins at 7:45 p.m. and takes place at the Old Boys’ School Building at Seaton Street.

Ambassador Richards congratulated the students for participating and also credited the teachers for preparing the students. Appreciation was also expressed to the students who attended the competition to support their classmates.

Director of Youth Geoffrey Hanley was so impressed with the level of enthusiasm generated at the show that he engaged Ambassador Richards about the possibility of having the quiz competition return in 2009 with an expanded format.

The “Let’s See What You Know ““ HIV/AIDS Game Show” is part of an HIV/AIDS awareness campaign called “The More You Know.”

The male CARICOM Youth Ambassador invited members of the public to attend the finals and support this educational initiative. “If today’s preliminary rounds are an indication, we are in for an entertaining show,” he concluded.