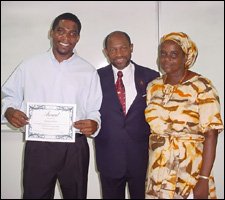 The Government of St. Kitts and Nevis is committed to ensuring that the twin-island Federation develop and maintain a thriving agricultural industry while at the same time preserving the thrust toward the service-oriented economy.

“Only last month, the Cuban Alumni Association of St. Kitts and Nevis planned a ceremony in honour of four nationals who recently graduated from Cuban institutions of higher education in the fields of accounting, dentistry, engineering and medicine,” said Dr. Douglas, who reminded the guests that Dr. the Hon. Earl Asim Martin was the first of such graduates and who today is a very senior and successful Parliamentarian and Minister of Government.

Dr. Douglas informed that in 2008, there were two graduates and the year before that twelve (12), which brings to 41, the number of students who have graduated from Cuba, almost all of whom are now gainfully employed or self-employed in the Federation.

“This is remarkable considering that we lose a vast majority of our young people who migrate to further their studies abroad and never return.  Think about the impact Cuba is making on my Government’s pursuit of maximizing the strength of one of our greatest assets, human capital,” said the Prime Minister.

He said the list of Cuban experts who have come to St. Kitts and Nevis to conduct training in social work, sculpting and craft-making, dancing, sports, and agriculture.

“On my visit to Cuba in the first quarter of 2007, I had the privilege of visiting some hydroponic or organic farming.  We engaged the Cuban authorities and expressed our desire to experiment with this type of farming in St Kitts and Nevis.  Subsequently, two Cuban experts were dispatched here to work with the Department of Agriculture and soon thereafter, many backyard gardens developed as a result.  My Government believes that this is a one small step toward ensuring food security, while providing a source of income to subsistence and small scale farming.  Not only were the experts able to demonstrate but they were also able to train some of our own people to continue this kind of farming even after they have returned to Cuba.  But this is not the only agricultural venture,” said Prime Minister Douglas.

He said that the Miracle Eye Care Mission, a joint initiative by both the Cuban and Venezuelan Governments is a hallmark of former Cuban President Fidel Castro who has often displayed acts of philanthropy and altruism toward his Caribbean friends.

“May he continue to enjoy long life!  Through this programme, thousands of Caribbean nationals were able to receive medical treatment at no cost in Cuban hospitals.  Initially, this project was for eye care, but some patients were diagnosed with other non-communicable diseases for which they were treated in Cuba.  I understand that the number of consultations that occurred numbered more than half of the Federation’s population. The outcome of this inventiveness is long-lived and far-reaching. In addition to the life-changing operations performed, many friendships were forged which may span a lifetime and our people experienced the Cuban culture,” said the Prime Minister.

He praised the Cuban Medical Brigade, noting that the team of dedicated medical doctors and technicians who are working in the hospitals in a plethora of fields, administering medical treatment to nationals.

He said that there has been a myriad of cooperation projects which the people of St. Kitts and Nevis have benefitted greatly from assistance from the good government and people of the Republic of Cuba.

“The cooperation has not been one-sided however.  I am pleased to recall that earlier this year, my Government was able to show its solidarity with our Cuban brothers and sisters when we donated a sum of money to that country, after it was ravaged by Hurricanes Gustav and Ike,” said Dr. Douglas.

At the United Nations General Assembly, St Kitts and Nevis supports the UN-sponsored resolution which urges the United States to end the economic and commercial embargo.

“I promise that under my Government, we shall continue to support such and similar resolutions in international fora in view of our extremely good and friendly relationship with Cuba,” said Dr. Douglas.