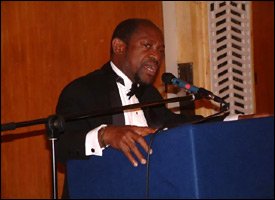 St. Kitts and Nevis must use the next 25 years to maximise its potential in a global context, using the emerging regional Caribbean Single Market and Economy (CSME) and the proposed Economic Union of the OECS as the building blocks to its future economic structure.

“Over the coming years, it is vital that we build a highly productive Service Economy, and in doing so create a strong entrepreneurial environment, empowering our men and women to become more creative in income generating projects, and at the same time, we must raise our standards to international levels,” St. Kitts and Nevis Prime Minister Hon. Dr. Denzil L. Douglas told close to 600 nationals at a 25th Anniversary Dinner and Ball in London on Saturday night.

Prime Minister Douglas told the audience which included members of the Diplomatic Corps that St. Kitts and Nevis will have to develop adaptive strategies that address a variety of matters, including fiscal policies and management, the modernisation of Government and its processes, building greater involvement of Civil Society, enhancing accountability and transparency, and securing a better level of political democracy for the people of the Federation.

“It is also about accelerating the degree of economic activity through increase investment, enhancing efficiency in all areas of the economy, by reducing vulnerabilities and by ensuring environmental integrity,” Prime Minister Douglas said.

He said that substantial change will require a reorientation in the way citizens think and behave as a people. “Our work ethic has to improve. Attitudes must improve,” said Prime Minister Douglas.

He intimated that the Federation’s survival as a nation will depend on its people.

“Education, technical skills and leadership will be prime components in charting the strategy of future growth and development. I believe that the transformation of our economy out of sugar also provides the opportunity for a change in our mental disposition as a people. The emerging economy leaves room for a diversity of ideas, the opportunity to take our energy and express ourselves in a multitude of ways that not only provide spheres for income generation, but also generate a great deal of national pride, unity and love,” said Prime Minister Douglas.