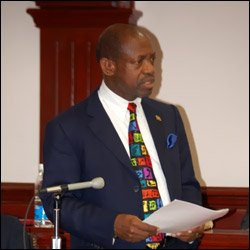 “I’m also advised that the Injunction does not prevent Parliament from proceeding with its business,” Dr. Douglas said during the debate following Wednesday’s tabling in Parliament of the Boundaries Commission Report.

“Were I advised that the Injunction had so impeded me or Parliament with its work, I would not have proceeded to do so or advised Parliament of the need for a sitting to proceed with the People’s Business,” said Dr. Douglas.

Dr. Douglas said that fundamental to his decision to proceed, is the fact that the there is a Constitutional requirement that election be held by a certain period and that time is fast approaching.

Prime Minister Douglas pointed out that it is a requirement of the Constitution that the Boundaries Commission shall submit a report at intervals of not less than two or more than five years and read the relevant section, which reads:

“(3)  As soon as may be after the Commission has submitted a report under subsection (1) (a), the Prime Minister shall lay before the National Assembly for its approval the draft of a proclamation by the Governor-General for giving effect, whether with or without modifications, to the recommendations contained in the report, and that draft proclamation may make provision for any matters that appear to the
Prime Minister to be incidental to or consequential upon the others provisions of the draft.

(4)  Where any draft proclamation laid before the National Assembly gives effect to any recommendations of the Commission with modifications, the Prime Minister shall lay before the Assembly together with the draft a statement of the modifications.

(5)  If the motion for the approval of any draft proclamation laid before the National Assembly under subsection (3) is rejected by the Assembly, or is withdrawn by leave of the Assembly, the Prime Minister shall amend the draft and lay the amended draft before the Assembly.

(6) If any draft proclamation laid before the National Assembly under subsection (3) or (5) is approved by a resolution of the Assembly, the Prime Minister shall submit it to the Governor- General who shall make a proclamation in terms of the draft; and that proclamation shall come into force upon the next dissolution of Parliament after it is made.”

Dr. Douglas pointed out that the time such a report was submitted was in 1984.

“By Schedule 2 Section 1 of the Constitution, there is a requirement that subject to certain factors all constituencies shall contain as nearly equal number of inhabitants as appears to the Constituency Boundaries Commission to be reasonably practical,” said Prime Minister Douglas, who noted that after the last election during the hearing of the Petitions it was recognized that over the years the Constituencies’ sizes became more and more unequal,” he added.

He said the Government recognised that were it to hold any future elections on the old Boundaries, those elections were open to challenge in the Courts.

“It was therefore decided that the time had come for the Boundaries to be reviewed and it appointed the Constituency Boundaries Commission (along with a technical team to assist it) examined and report on its examinations and make recommendations if necessary,” disclosed the Prime Minister.

He said that the Report of the Boundaries Commission was submitted to him on Friday July 3rd 2009 at 1:00 P.M. and delivered to the Governor-General at 2:00 P.M.

Dr. Douglas said he was advised that the present course of conduct being pursued by People’s Action Movement and the Member for Constituency 5, Hon. Shawn Richards, presents a real and present danger of derailing the Government’s commitment to hold the election within the time period specified by the Constitution.

“I will not allow Government to fail to comply with its obligation to hold elections with the period specified by Parliament. This is so in particular when the member Constituency 5 and his Party, make complaint to the Court about, but as the record will show refused to take part in the electoral reform process despite invitations and many opportunities to do so but now complains,” said the St. Kitts and Nevis Leader.