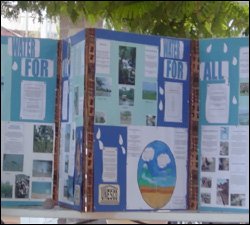 “Cool Kids Go Green” is the slogan being used by a group of young people in St. Kitts, as they try to get peers and the general public more conscious of caring for the environment.

The group was featured on this week’s SKNIS Perspectives, as part of a special edition which highlighted the consequences of climate change and the response of the global community.

“Honestly, I don’t think the message has gone across as strongly as we had hoped,” said group member Zoe Gonsalves, who was supported by Jomo Bacchus and Tuwold Slader during the interview. “We are hoping that we can “¦ continue to send the message and try to get more people involved in keeping the environment clean and reducing their carbon footprint.”

The young people are part of a 12-member group that is affiliated with the international Emerging Global Leaders Programme. Students from Verchild’s and Basseterre High Schools as well as the C.F.B. College make up the local club.

Last Friday, members participated in a beach clean up campaign organized by the Ministry of Sustainable Development. They also held a Fun Day at Independence Square on Saturday, where environmental displays and literature were on hand to educate passersby.

In order to reach more people, the group plans to have similar activities in the future and would like more persons to participate in beach cleanups to get a first hand account of the severe damage that is caused to the coast as well as the sea.

Excerpts of presentations from the United Nations’ September 22 Summit on Climate Change, which drew 100 world leaders to New York, were featured on Perspectives. Segments of a video message by St. Kitts and Nevis Prime Minister Honourable Dr. Denzil Douglas, who urged immediate action by developed countries, were also aired.

The youth were encouraged by recent statement from world leaders including United States President Barack Obama, who has acknowledged the dangers of climate change and pledged to do more to reverse global warming by reducing carbon emissions.

“It’s not going to be just us saying it,” Zoe stressed, “It’s going to be coming from the top [down] so it is definitely going to be helpful to us.”

Tuwold noted that locals should be more conscious about their surroundings as “every little bit contributes to the big picture. Even in our small island, cutting down pollution [does] a great, great deal in saving our planet,” he concluded.