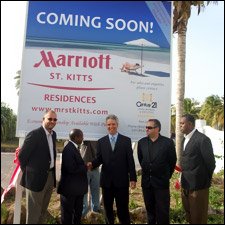 St. Kitts and Nevis Prime Ministr Hon. Dr. Denzil L. Douglas reiterated a commitment made several years ago to make life better for the people of the twin-island Federation.

Speaking at the demolition ceremony of the unfinished building of the former Angelus Resort to make way for the construction of the multi-million dollar Marriott Residences, Prime Minister Douglas noted the difficult times around the world created by the global economic and financial crisis.

“All of the evidence throughout the Caribbean, the evidence throughout Europe and much of the world tell us that new projects are simply not on the cards. The logic, reason and evidence most certainly tell us that major tourism projects are contracting or are closing down and definitely not expanding,” said Prime Minister Douglas, quickly pointing out that St. Kitts and Nevis is on the threshold of another chapter in the partnership between the Marriott, Century 21 and the Government and the People of St. Kitts and Nevis.

“This is a chapter that I welcome because at this time there are numerous challenges that our people are facing,” noted Prime Minister Douglas, pointing out that the developers, Vic De Zen and partners, must have thought long and hard whether to fulfill their obligations and promise made several years ago to proceed with the project.

“This is an occasion that demonstrates the progress that we are making in tourism. This is a chapter that my Government welcomes most,” said the Prime Minister and Minister of Tourism.

Dr. Douglas said although the building is to be demolished, he sees hundreds of jobs, contracts for the local business community and an expanded market for local farmers and opportunities for the local florists with the completion of the 30-acre site for the construction of 270 condominiums at a cost of US$125 million.

“It will create a demand for local heavy equipment operators, landscapers, car rental agencies and other ancillary services in the tourism and hospitality industry that this development will bring,” said Dr. Douglas.

He said that the relationship with the Vic De Zen group has been beneficial and has produced good investment opportunities which have provided economic stimuli for the twin-island Federation.