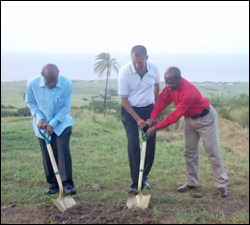 Construction has begun on Kittitian Hill, a hybrid development concept incorporating the best of traditional architectural aesthetics, with the best of modern construction and lifestyle technologies.

Speaking at Saturday afternoon’s groundbreaking ceremony for Phase 1, which will cost US$200 million in foreign direct investment, St. Kitts and Nevis’ Prime Minister Hon. Dr. Denzil L. Douglas reiterated his Government policy that employment opportunities, entrepreneurial options, and economic development would not be restricted to any one area “but would instead be made manifest from one end of this country to the other ““ and to all points and various towns in between.”

“We believe that every part of St. Kitts and Nevis must take part in this Federation’s steady march forward. That is why we would want to see the transformation of this country where traffic would not always be moving from this part of the country to Basseterre at mornings, but also have traffic moving from Basseterre in the mornings to this part of the country in the mornings ensuring that there is equal development opportunities and equal entrepreneurial and employment opportunities for our people here in St. Kitts and Nevis,” said Prime Minister Douglas.

“Kittitian Hill is the manifestation of our belief that real estate developments in the Caribbean need not be isolated or cut off from the communities in which they are based, but that they can instead be designed to blend and merge all that has always been here, with all that is yet to come,” Prime Minister Douglas told invited guests including Deputy Prime Minister Hon. Sam Condor; Speaker of the National Assembly, Hon. Curtis Martin; Cabinet Secretary, Mr. Joseph Edmeade; Permanent Secretary in the Ministry of Tourism, Mrs. Patricia Martin; Permanent Secretary in the Ministry of Sustainable Development, Mrs. Hilary Hazel; Ambassador His Excellency Wendell Lawrence ; Chairman of the Whitegate Development Corporation, Mr. Thomas Williams and Chief Marketing Officer for Sedona Resorts, Mr. Charles Bromfield.

Dr. Douglas said that as Prime Minister, he is particularly concerned especially at this time about the people continue to make a decent living.

“I am pleased that Phase I of Kittitian Hill will produce over 350 jobs during construction and over 1,200 permanent jobs thereafter.  Phase II will then produce some 800 additional, permanent jobs for the people of St. Kitts and Nevis,” said Dr. Douglas, who also expressed concern about the enhancement of  the humanity of the people as it is a well-established fact that artistic endeavors have a highly humanising and stabilising impact on societies  the world over.

He said he was pleased by the extent to which Kittitian Hill will encourage and develop the artistic and creative inclinations and talents of the people of the Federation in general, and the residents of the Capisterre area, in particular.

Prime Minister Douglas congratulated Chairman Valmiki Kempadoo and his Board of Directors on having brought this visionary undertaking to this stage, especially at a time when the Federation is seriously impacted and challenged from the global economic and financial crises which still engulf not only the major democracies of the world but also small developing countries like St. Kitts and Nevis.

The resort will be opened in December 2012 and will be operated by Sedona Resorts – an ultra-luxury spa and hotel operator.