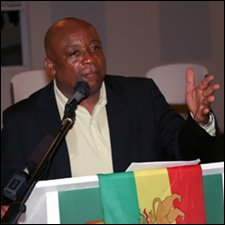 A sense of history and consciousness were two guiding principles in decision making in government, the absence of which made way for an array of difficulties in the development process. The view was expressed by Deputy Premier of Nevis Hon. Hensley Daniel, as he addressed members of the Caribbean Rastafari Organisation (CRO) on Thursday.

Mr. Daniel called on Rastafarians at the start of the 13th CRO Summit, drawn from Anguilla, Antigua, Barbados, Guadeloupe, Martinique, Jamaica, St. Lucia and host country Nevis that he was hopeful they would help to build that consciousness among themselves and spread it to the rest of the community on conclusion of their meeting.

“I find it troubling that too many young people dont know enough of our history and culture, dont know enough of the work of our black people in the development of the society and I am charging the Rastarafi Movement to lead in that regard,” he said.

Mr. Daniel quoted Dr. Martin Luther King, who cited that the tendency to ignore black peoples contribution to the development is as old as the oldest history books and as contemporary as the morning’s newspaper and further reiterated his call for the Rastafarians to have a major role in the community in their way forward.

While he pointed to important discoveries made by black persons throughout history, Mr. Daniel noted the recent contributions of Jamaican Athletes at the now concluded World Games in Berlin.

“Usain Bolt is making the world stop and stand at attention [and] most importantly, the athletes from Jamaica who are doing well are home grown. They did not go to the Unites States to be ready for international competition. They were prepared in Jamaica in the Caribbean.

“So these things are not to go unnoticed and these things are to be celebrated. I find that we in the Caribbean islands have to find a way of celebrating more of our achievements and we have to begin now,” he said.

The Deputy Premier also pointed to what he described as two important landmark policies made by the sitting Nevis Island Administration in recent years.

“Young teenage pregnant girls who get pregnant must return to school because education for black people is the single most important aspect of social and upward mobility. To rob them of their education was to consign them to poverty forever and so we stopped that.

He said further the Nevis Island Government had made budgetary allocations in three major areas of Education, health and social services in an effort to promote a new mind set.

It would bring about a new and better society, with educated and healthy people, whose social relations would allow them to live in peace with their brothers and sisters even though they shared divergent views.