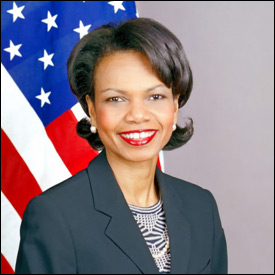 Condoleezza Rice – US Secretary of State

United States Secretary of State, the Hon. Condoleeza Rice has congratulated St. Kitts and Nevis on its 25th Anniversary of political independence.

America’s top ranking Bush Administration Cabinet official said the United States “as a neighbour and friend applauds the achievements over the past quarter century.”

“Since achieving independence, St. Kitts and Nevis has been one of an ever growing number of countries in the Western Hemisphere that enjoy the freedoms and opportunities afforded by a democratic government,” said Rice in the 25th Anniversary Commemorative booklet published by the Embassy of St. Kitts and Nevis in Washington, D.C.

Secretary of State Rice said St. Kitts and Nevis sets an example of how people can harness their national resources to build a secure and prosperous future.

“As the world faces growing concerns over energy and environmental sustainability, St. Kitts and Nevis is making strides in bio-fuels and geothermal energy to meet the nation’s energy needs with environmentally friendly technology,: said Rice, adding that the United States will continue to work with St. Kitts and Nevis on matters of energy security as well as on Caribbean regional issues such as combating drug trafficking and transnational crime.

She said the United States looks forward to many more years of partnership with St. Kitts and Nevis in promoting democracy, security and prosperity throughout the Caribbean.