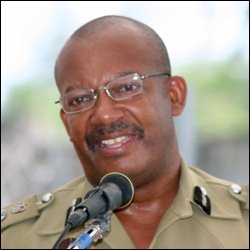 Commissioner of the St. Christopher and Nevis Police Force Mr. Austin Williams described the ground breaking for the Bellevue Police Housing Project on Nevis as a step in the right direction.

The Federation’s Top Cop made the comment on Thursday when he delivered remarks at a ceremony to break ground for the project which was initiated by the Nevis Island Administration with funding from the Republic of China on Taiwan.

“I believe this is more than a step in the right direction. As Law Enforcement Executives, we have been discussing how best to develop community based solutions to crime and other forms of social decay and public safety challenges. There is no doubt that our role has now grown far past that of street cop to that of international crime fighters and preventers of terrorism.

“For this reason we must respond to the needs of the police if they are to effectively respond to our needs. I say again this is a step in the right direction,” he said.

Commissioner Williams explained that he had seen the blue print of the ultra modern police barracks which he referred to as a first class project.

“This I am sure will help alleviate the present shortage of accommodation that we are experiencing,” he said.

The Commissioner also used the opportunity to report that public faith in the police was on the rise and continued to do so in leaps and bounds.

He said they were working overtime to make the Police more visible in the communities and to become more involved in community based policing approaches.

“We are committed to keeping our mandate of being transparent and to display a sense of respect for dignity of those we serve and protect,” he said.

However, the Commissioner noted that while he shared the philosophy that good police community co-operation had greatly contributed to the efforts of the Police Force in the areas of prevention, detection of crime and disorder, there were large corporations which were more visible than others who assisted the Police in their fight against crime.

“I believe that the responsibility is ours to continue to pursue these private corporations and persuade them that together we can achieve more,” he said.

Commissioner Williams further explained that there were many persons who remained sceptical of private public partnerships in particular as it related to the police.

“Some critics are often of the view that with such a practise there is some risk of conflicts of interest. There is risk in anything that is not properly managed.

“We have built into our regulations and Standing Orders how and under what circumstances we seek and accept private assistance.

“It is not just a private business venture for businesses but some are more than converts and understand that their role as stakeholders in the development and safety of the community that patronise their business is vital to the sustainability of their very own businesses,” he said.

The Commissioner cited that the practise was not a novel one and pointed to the United States of America which he said was well known for tapping into the resources of its private partners.

Notwithstanding, he said the general public had been working with the police to help reduce the incidence of crime and social decay in the Federation. He thanked them and private organisations who continued to work hand in hand with the St. Christopher and Nevis Police Force to maintain peace and stability in the Federation.