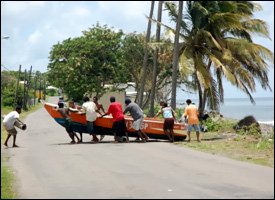 St. Kitts and Nevis Prime Minister Hon. Dr. Denzil L. Douglas has expressed thanks to citizens and residents of the twin-island Federation for taking the warnings and weather bulletins on the passage of Tropical Storm Ana seriously.

Dr. Douglas, who as Minister of National Security has responsibility for the National Emergency Management Agency (NEMA), thanked God “for guiding Ana away.”

“I also want to thank all our citizens and residents for taking the warnings and bulletins seriously as evidenced with the responses and preparations,” said Dr. Douglas, who urged continued vigilance as Hurricane Bill moves in the Atlantic and could become a threat.

“We ask for continued prayers and understanding as we practice being our brothers’ keeper. I call for unity among our citizens and hope that the NEMA community as well as national teams and committees continue to be in state of alert and readiness to deal with any challenging circumstance,” said the Prime Minister and Minister of National Security.

Dr. Douglas kept abreast of the approach of Ana on Sunday, while attending several functions including a Special Family Service for the Birthday of Pastor George Gilfillan at the Saddlers Pentecostal Church and the international friendly football match between St. Kitts and Jamaica at Warner Park Football Stadium.

Ana has weakened into a tropical depression, with sustained winds of 35 mph.  Ana is currently located southeast of Puerto Rico and is moving west northwest at 28 mph.  A tropical storm watch remains in effect for Puerto Rico, the U.S. Virgin Islands, St. Kitts, Nevis, Anguilla, St. Maarten, St. Martin, Saba, St. Eustatius, Guadeloupe, St. Barthelemy and the Dominican Republic.  The storm is expected to dump 2″“4 inches of rain on the area, with isolated maximum amounts of 6 inches over mountainous terrain.

At 5:00 AM, Hurricane Bill was located approximately 1,160 miles east of the Lesser Antilles.  Bill is moving quickly to the north northwest at 22 mph and is expected to continue this motion for the next 24″“24 hours.  The storm is expected to strengthen over the next several days and could become a major hurricane by Wednesday.

The National Hurricane Center estimates Hurricane Bill will track northeast of the Leeward Islands and Puerto Rico.  Bermuda is in the middle of Bill’s forecast track and could be impacted late Friday or early Saturday morning.