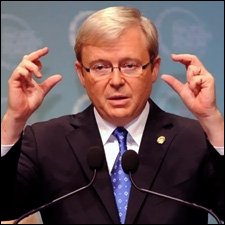 Australia has expressed its desire to work with the Federation of St. Kitts and Nevis in addressing the serious challenges facing today’s world.

The Australian Prime Minister, the Right Hon. Kevin Rudd in a message congratulating his St. Kitts and Nevis counterpart, the Hon. Dr. Denzil L. Douglas, on his twin-island Federation’s 26th anniversary of political independence, identified international development, the economic slowdown , climate change and conflict prevention as some of these challenges.

“Such issues require global solutions and Australia is firmly committed to supporting and enhancing the vital role of multilateral institutions including the United Nations in meeting these challenges,” said the Australian Prime Minister.

In extending warm wishes to Dr. Douglas and the People of St. Kitts and Nevis, Prime Minister Rudd said both countries “continue to share strong bonds underpinned by our membership of the Commonwealth and the United Nations. These bonds reflect the warm, long standing and cooperative friendship between our two countries.”

Prime Minister Rudd said he was confident that the friendly relations existing between Australia and St. Kitts and Nevis will continue to prosper in the coming year.

President of the Councils of State and of Ministers of the Republic of Cuba, His Excellency Raul Ruiz, in his message of congratulations to Prime Minister Douglas and the People of St. Kitts and Nevis said the larger Caribbean nation “resolves to continue strengthening the bonds of friendship uniting Cuba and its sister nation.”