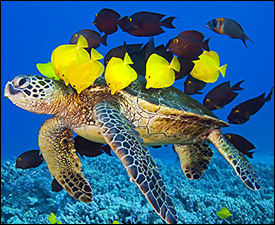 The flora and fauna in the Central Forest Reserve (CFR) National Park was under observation last week when the Island Resources Foundation (IRF) conducted a baseline study of the area.

IRF which is headquartered in St. Thomas, USVI, is a not-for profit service organization that provides technical and professional assistance to small island states, primarily with donor support or public-sector contracts.  The Foundation is also a major contributor to global initiatives designed to enhance the development options of small islands.

While in the Federation, the four-member IRF team undertook an environmental and socioeconomic study of key areas of the site which will facilitate the implementation of a medium or long term monitoring and evaluation system for the area.  They were able to catch and identify bat species within the National Park boundary and surrounding areas, hold meetings with stakeholders having and interest or role in the development of the park and visit caves or abandoned buildings within the forest.  The areas of study included Dos D’Ane Pond, Mansions, Phillips’ and Old Road.

According to Ilis Watts, local OECS Protected Areas and Associated Livelihoods (OPAAL) Site Manager, the last recorded study on the area was conducted in the 1940s.  As such, the information gathered will strengthen and expand the knowledge base and determine threats and issues facing the OPAAL site (Central Forest Reserve National Park).  The study is also intended to identify environmental, socio-economic and stress-reduction indicators which will be used in future monitoring programmes.

Dr. Brian Cooper, IRF Principal Investigator, noted that his team would have to take specimens of some of the plant species from the island for further scientific identification and investigation.

Mrs. Watts revealed that the IRF team is expected to submit a report by April 2011.  She noted that the findings from the rapid assessment would serve as an important resource for the National Park’s Interpretation Centre and would be quite useful for tourists, researchers, students and locals.

The OPAAL Site Manager also revealed that the IRF team recommended that the the Dos D’Ane area should be dedicated for scientific purposes, due to the fragile biodiversity characteristic of that area.

While in the Federation the IRF personnel worked closely with the Department of Physical Planning, with the assistance of Kate Orchard of the St. Christopher National Trust.