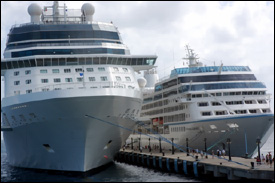 For the first time in cruise history, the only two ships in the Celebrity Solstice-Class, docked at St. Kitts’ Port Zante on Wednesday.

The Celebrity Solstice, which debuted in 2008 and the Celebrity Equinox which made her debut in August 2009 brought nearly 6,000 passengers.

The 2,850-passenger capacity Solstice brought 2,867 passengers and 1,257 crew arrived from St. Maarten and departs for Miami.

The Solstice and Equinox are the first of a new class of five vessels to be launched through 2012.