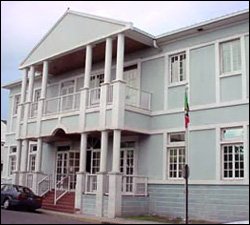 Although he has not submitted new names to the Governor General following the sudden resignation of his two party officials from the Constituency Boundaries Commission (CBC), the Leader of the Opposition, Hon. Mark Brantley, in court documents filed claims he has not been given the opportunity to make new appointments.

A joint application by Brantley and PAM’s representative, Hon. Shawn Richards, seeking an injunction against the CBC and other officials, was rejected in Court on Friday by resident judge, His Lordship Justice Belle.

Justice Belle, who earlier noted the application from Brantley and Richards contained the same arguments that had already been ruled upon by another court, will hear a judicial review on Tuesday.

Section 49 of the Constitution states in part: ” The Commission may, subject to its rules of procedure, act notwithstanding any vacancy in its membership and its proceedings shall not be invalidated by the presence or participation of any person not entitled to be present at or to participate in those proceedings: Provided that any decision of the Commission shall require the concurrence of a majority of all its members.”

Mr. Brantley and Mr. Richards also allege bad faith, motive, bias, oppression, unreasonable, unfair, irrational behaviour by the members of the Constituency Boundaries Commission and an abuse of power in the preparation of the Report and that they still have a right to appeal the earlier ruling of Justice Errol Thomas.

CCM’S Brantley and PAM’s Richards also join forces to seek Orders of Mandamus restraining the CBC from submitting any Report to the Governor General and the Prime Minister, from conducting or supervising any Elections or General Elections on the basis of the existing boundaries and the Electoral Commission and the Supervisor of Elections from conducting any elections or general elections on the existing numbers and boundaries.

The two opposition legislators contend that there was a failure to consult the PAM Representative, Hon. Shawn Richards, or the PAM party as both had legitimate expectation regarding the preparation and any proposed changes to St, Christopher 5 which he represents, as well as all other constituencies and there was no reasonable time given to Mr. Richards for consultation or public discussion or education.

Both contend that the Governor General failed to consult Mr. Brantley upon the creation of the vacancies occasioned by the resignations of Messrs Amory and Perkins.

Mr. Brantley is also alleging that the CBC failed to give Mr. Richards, his constituents or the People’s Action Movement adequate time and or notice or opportunity, to properly consider or comment on any report to be prepared or prepared and or submitted by the CBC.

During the hearing of the request for the injunction and judicial review, Justice Belle noted the application from Brantley and Richards contained the same arguments that had already been ruled upon by another court.

“The lawyers representing PAM had a chance to make clarifications about what he termed “ambiguities” in the Constitution in another court but they didn’t do so.

“This court can’t fix it,” he said. “You are asking me almost to legislate.”

The respondents named in the matter are the Constituency Boundaries Commission, the Electoral Commission, the Supervisor of Elections, the Governor General, the Speaker of the National Assembly, the Prime Minister and the Attorney General.