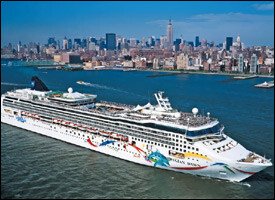 The 2,500 passenger Norwegian Dawn which visited St. Kitts on Thursday broke down on Friday on its way back to Miami after a week-long trip around the Caribbean.

Passengers on board say the ship completely lost all power and United States Coast Guard ships and helicopters were dispatched to the scene.

Media reports say that all activities on board the ship were cancelled Friday and the ship is headed to the port of San Juan in Puerto Rico, not Miami on Saturday morning. Passengers were told they would have to make accommodations to return to Miami, but were offered a 75 percent discount and credits of 50 percent on a future cruise within one year.  Norwegian Cruise Line also offered to pay for hotel accommodations and airfare.

During the power outage, the more than 2,000 passengers on the ship had no access to running water, electricity air conditioning or toilet services in the hot Caribbean.  The current temperature in San Juan is partly cloudy 85 degrees with 67 percent humidity and guests have been asked to conserve water because the ship has limited capacity to produce new fresh water.

The ship was expected back in Miami on Sunday for a 5 day cruise but that cruise has been cancelled due to  the severity and complexity of repairs needed.  All reservations for the Norwegian Dawn have been locked out at this time.

Passengers onboard the ship have reported that without air conditioning, the interior of the ship has become very hot and uncomfortable as all power is being used for propulsion of the vessel.   To escape the heat of the cabins, passengers were sleeping out on the ship’s open decks.

This is not the first time the Norwegian Dawn has had power failures.  Over the summer, the ship had lost power during a cruise to Bermuda for approximately one hour.