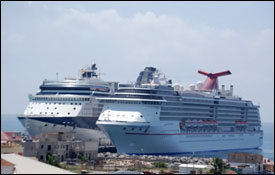 The 3,050-passenger capacity Carnival Victory arrived from St. Lucia Friday morning with 3,089 passengers on board and is scheduled to sail early Friday evening for St. Maarten.

Most of the passengers went sea and sunbathing, snorkeling, hiking, shopping and island tours via taxi and the St. Kitts Scenic train.

On Wednesday, the 2,038-passenger capacity Celebrity Millennium arrived from St. Croix with 1995 passengers. It departed later for Dominica.