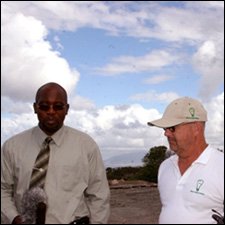 Minister with responsibility for Natural Resources and the Environment on Nevis Hon. Carlisle Powell, described a US$38,000 grant to the island from the Caribbean Community (CARICOM) on Wednesday as an indication, of its strong backing for the geothermal development project on Nevis.

The Minister’s comment came on Thursday while a two member CARICOM delegation led by Programme Manager, Energy Mr. Joseph Williams, visited the island for meetings with the renewable energy developers West Indies Power Ltd. and the Nevis Island Administration. The visitors also got a first hand look at Nevis3, a geothermal borehole at Hamilton.

“CARICOM is signalling its very strong support for the work we are doing in Nevis in renewable energy, in particular, in geothermal.

“They are putting their support in the form of funds US$38,000 to assist us to move forward, making sure that we are getting the right consultancy support for this very valuable project which is in Nevis but is for every intent and purpose a Caribbean project, indeed followed worldwide,” he said.

The Minister noted that CARICOM’s was not alone in its support for the project and pointed to the Iceland, ICEDA, UNIDO and the Organization of American States, whose support had also been important to the geothermal project.

Mr Powell also used the opportunity to announce another landmark in the development of geothermal energy on Nevis and cited that the Power Purchase Agreement and the contract with West Indies Power would be signed at a public forum in Charlestown on Tuesday April 28.

“Those documents will set out clearly all the terms of the relationships between NEVLEC, the government of Nevis and West Indies Power Limited. So we are excited because it means that we would have taken another step towards providing cheaper, cleaner energy to Nevis and the people of Nevis, St. Kitts and the wider Caribbean,” he said.