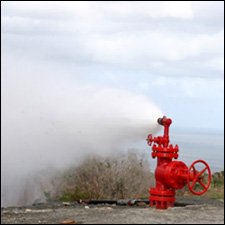 Programme Manager, Energy of the Caribbean Community (CARICOM) Secretariat Mr. Joseph Williams described his impressions of the geothermal well at Nevis 3 in Hamilton as impressive.

His observation came when he was given the opportunity to witness the geothermal steam jetting from the borehole when he visited Nevis on Wednesday, to meet with geothermal developers West Indies Power Limited and with the Nevis Island Administration.

“What is important for us on this visit is to actually see the stage of development, talk with the developers and I think it’s impressive”.

“The temperatures and the flow are impressive. The size of the reservoir as indicated by the developers is also something useful to learn from being here,” he said.

In response to a question from the Media Mr. Williams said though he had had the opportunity to visit other potential geothermal sites in other parts of the Caribbean, Nevis was most advanced in its development.

“We have looked at a few others that have potential but certainly not at this stage.

“I think it is important to see the development where it is at right now. I think it was an interesting experience,” he said.

According to Mr. Kerry McDonald Chief Executive Officer of West Indies Power the flow from the borehole at the time of Mr. William’s visit was 700 PSI with an estimated temperature of 260 degrees Centigrade at the well head.

He further explained that the well 2,900 feet deep and during drilling operations they had hit the top of the reservoir at 2,500 feet. He said Nevis 3 as it was named during the explorations was the southernmost well of three, with the other two each a mile and a half apart

“Basically the reservoir is three miles long [and] three miles wide. Our initial reservoir studies show it to be approximately 400megawatts of power,” he said.